For my film Waxworks I have tried to create sets so stylized that they evidence no idea of reality. All it seeks to engender is an indescribable fluidity of light, moving shapes, shadows, lines, and curves.  -Paul Leni 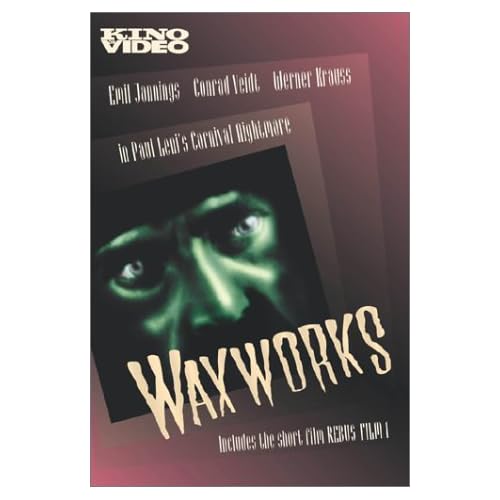 One of my all time favorite fims to come out of the German expressionists is Waxworks by director Paul Leni. Though not purely an expressionist enterprise, Waxworks functions within the history of expressionist film as a kind of artifact as to how the movement had changed within the span of the five years after the release of Caligari. Utilising expressionist sets derived from the theatre of Max Reinhardt, still, the film has an entirely different feel from Caligari, the actors do not move to match their warped environs. I have long felt that one of the keys to understanding pure expressionist cinema is to understand how actors adapt to their world of slanted windows and claustrophobic walls. Whether actors are directed to hobble along, to crouch within a confined space as if pressed by an invisible weight, makes all the difference. In this sense, Waxworks, five years after the 'pure' originary expressionist film, draws more from Reinhardt's theathre than does even Caligari in its cooption of light effect, setting, while adopting none of the expressionistic movement so central to the genre. One can think of Schatten or Nosferatu as other examples of this later expressionism, one with Waxworks in their treatment on on screen movement.

That being said, Waxworks is a remarkable film. It uses a framing device to set up three stories, or vignettes, each about a 'historical figure.' Ostensibly a horror film, the three vignettes are about Harun al Raschid (the caliph of Baghdad), Ivan the Terrible, and Jack the Ripper. Each vignette has a remarkably diverse visual style, with the denoument culminating in the incredible (and most immediately expressionistic) episode in a carnival with Jack the Ripper. The incredible spectrum of technical skill demonstrated by the Jack the Ripper vignette (understandably the shortest for this reason) is absolutely remarkable. While less technical, the other two vignettes are no less engaging. In fact I would probably say that Emil Jannings' portrayal of the Caliph is my favorite part of the film, regardless of the ocular fireworks in the third part. Conrad Veidt plays Ivan the Terrible admirably as well, but the hilarity of Jannings rotund physique (heightened by circular set design!) is definitely a high point not matched. I cant recommend it enough.

I've included it complete (as usual) in nine parts below.

yo, where's the rest of the vid? you doubled up, son.