Mario Bava's The Whip and the Body 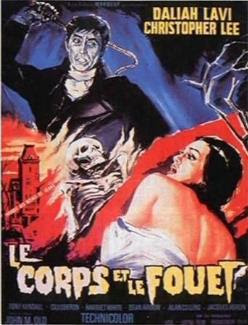 The crowning achievement of Mario Bava's ouvre, the Whip and the Body is an incredible testament to the inescapable pull of illicit eroticism.The delicate threshhold between pain and pleasure is explored deeply by Bava's masterful scripting and lenswork as an illicit affair between Dahlia Levi (Nevenka) and Christopher Lee (Kurt) takes place under the very nose of Nevenka's husband, Kurt's brother. If this sounds conventional, it is only because such a glancing summary does not take into account the nature of this affair, and it is unlike none other comitted to screen, at least none comitted so lovingly to celluloid than by maestro Bava. Nevenka feigns hatred of Kurt and yet she becomes posessed by Kurt's hard nature, the  physical pain he inflicts upon her body with his words and with his whip. Nevenka's body becomes a visible testament to her love, bearing welts from her lashings, scars, demarcations, brands of her passion disguised as physical manifestations of hatred. In this way Bava is expertly analyzing the ways in which bodies speak and witness, the complexity being that what they testify is as much colored by our own expectations as it is by what we actually perceive. What for us signifies rank brutality or barbarism for Nevenka is limitless bliss, erotic passion delighting in refusal, a refusal of accepting the literal, the painful, the actual nature of her wounds. In delimiting the sphere of pain as one of pleasure, Nevenka finds herself at the end of Kurt's whip, and we find ourselves in the cinema, mimetically inscribing anxieties and subterfuges, grafting them onto our perception of the action we observe. In this sense Bava's illicit eroticism can be set equilibrate to the very spectatorial moment of it's observation. We are implicated in the film as much as Nevenka, and for all the films grandoise romantic atmosphere, this fact cannot be unlearned. The formal filmic elements do not make the viewer forget his complicity, for Nevenka's pain becomes our pleasure, her 'happiness in crime' as Jules Barbey d'Aurevilly puts it in his Les Diaboloques, becomes that key to the reproduction of sentiment in the viewer, the joy of art in its totality.

The power relations between Kurt, Nevenka and her husband Christian are always in flux, and this is a fascinating component of the film in its own right. Nevenka with Christian, whoam she does not love, is a slave without any opportunity to experience freedom. And so she seeks out (or rather is exposed to) a fantastical domination under Kurt that gradually overtakes her all too real sense of domination by her marriage to Christian. That Nevenka finds physical domination more satisfying than psychic (or institutional) domination under Christian is fascinating because of how it implicates the 'reality' of the charachter. That the realm of the senses and stimulation becomes the outlet chosen to free Nevenka from her institutional domination does not seem obvious, and certainly not overdetermined. Reality, choice, power and pleasure are all in conflux in the film, masterfully so.

On a more technical note, the color in this film is extraordinary. For those of you who know the work of Mario Bava, this will not surprise you. But I must add, even I was extraordinarily shocked at how masterful his treatment of it is in this film. Anyone interested in second generation Italian horror knows the influence Bava had on the filmmakers who followed him in this regard, but if the Whip and the Body shows anything it is that he has remained unsurpassed in this area, refusing to be outpaced by his pupils. Christopher Lee gives one of the finest performances of his career in my opinion and this is saying quite alot, as his performance is purely physical, the original vocal track for him having been lost, he is dubbed over with another actors voice. The videos are under the nonsensical title WHAT because this is the title the british censors gave the film in its highly edited version upon release. I've always joked that it was probably entitled WHAT because so much of it was cut out that the audience could not help but to ask just what they were watching. The videos included however are of the unedited european cut, so disregard the title. A warning, above all the Whip and the Body is a ghost story used to express a tale about eroticism. If you are not familiar with the genre trappings you may not understand just how subversive this film actually is in its flouting of genre conventions. Straddling gothic romance and gothic horror, the Whip and the Body plays with genre to critique our perceptions of reality, bodies and the ways in which the two intersect at the point of erotic love.

Film is complete in nine parts below: