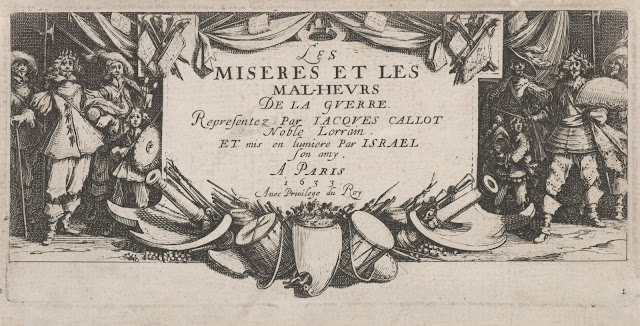 Jacques Callot's most famous prints are his two series each on "the Miseries and Misfortunes of War". These are known as Les Grandes Misères de la guerre, consisting of 18 prints published in 1633, and the earlier and incomplete Les Petites Misères – referring to their sizes, large and small (though even the large set are only about 8 x 13 cm). These still alarming images show soldiers pillaging and burning their way through town, country and convent, before being variously arrested and executed by their superiors, lynched by peasants, or surviving to live as crippled beggars. At the end the generals are rewarded by their monarch. In 1633, the year the larger set was published, Lorraine had been invaded by the French in the Thirty Years War and Callot's vision still stands with Francisco Goya's Los Desastres de la Guerra (The Disasters of War), which was influenced by Callot, as among the most powerful artistic statements of the inhumanity of war.

You'll want to click and enlarge these to view them optimally.