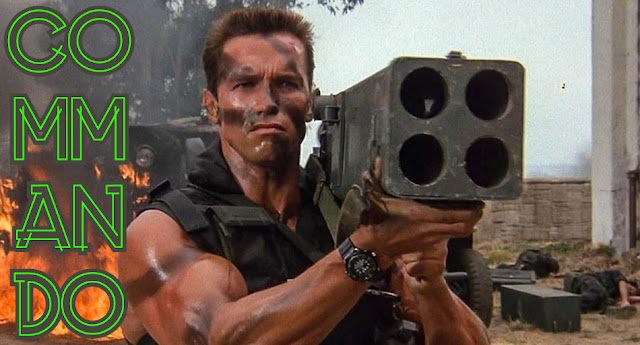 Imagine being Arnold Schwarzenegger circa 1985. You’ve won the Mr. Universe bodybuilding competition five times and Mr. Olympia seven times. Moving to the US in 1968 with dreams of becoming a movie star, you made your first film appearance within two years (the best-forgotten Hercules In New York) and managed to land a Golden Globe for your turn in Bob Rafelson’s Stay Hungry (1976).

By the mid-80s, you’d landed two massive hits at the box-office: Conan the Barbarian in 1982 and The Terminator in 1984. Okay, so you’ve had a few missteps along the way (Red Sonja didn’t exactly set the world on fire, and the less said about Conan the Destroyer, the better), but let’s face it: you’re still only 38, you’re built like a Greek statue, and you’re a star. The world’s at your feet.

Directed by Mark Lester (Class Of 1984, Firestarter), 1985’s Commando is steeped in the swagger of Schwarzenegger in his pomp. Arnie plays retired elite soldier Colonel John Matrix, who wants nothing from life than to live in a quiet cabin with his daughter Jenny (Alyssa Milano) and occasionally carry some tree trunks around his backyard. But then a group of evil mercenaries kidnap Matrix’s beloved daughter – their thinking being that this aggressive move will cow Matrix into offing the leader of the South American country of Val Verde, thus allowing lead villain Arius (Dan Hedaya) to seize power.

Instead of doing as he’s told, Matrix takes a flying leap from a jumbo jet in mid take-off and starts murdering his way towards the villains’ lair – a heavily-defended mansion on a remote island. Along for the ride is air stewardess Cindy (Rae Dawn Chong) who flies Matrix around in a plane and says what the audience is thinking (“I can’t believe this macho bullshit!”). 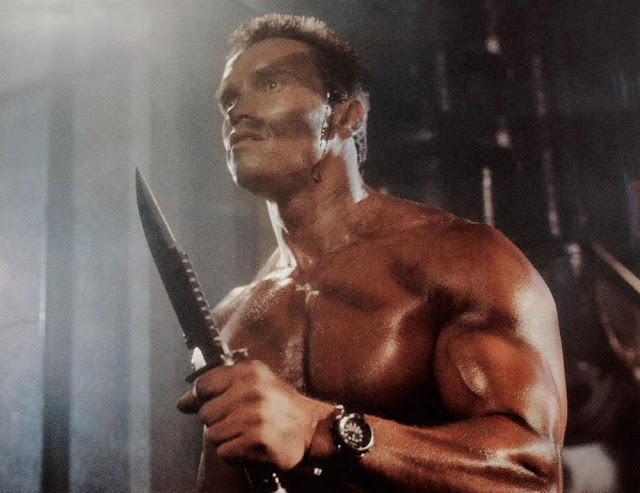 Those without an appreciation of ’80s action cinema might write Commando off as one more example of late Cold War jingoism, and it’s fair to say that it probably wouldn’t have existed without the likes of First Blood to pave the way for it. But Commando is well aware of how crazy it is; the early scene where Matrix and his daughter feed a deer is beyond parody precisely because it’s served up with such a knowing flourish. Commando isn’t meant to reflect reality; it’s about a hulking brute of an ex-soldier who can rip up a telephone booth and hold it aloft with a bad guy still rattling around inside it.

Strangely, Commando wasn’t written as a larger-than-life Schwarzenegger vehicle, but as a film about a weary soldier forced into battle following the kidnap of his daughter. The original screenplay was co-written by Jeph Loeb, who’s best known these days for his comic book writing – Batman: The Long Halloween and Hush – and being the head of Marvel TV.

Along with a draft of Teen Wolf, Commandowas among the first things Loeb ever wrote – at the time, he was still in his 20s and trying to break into the movie business. Loeb and his writing partner Matthew Weisman originally envisioned Matrix as an older, more out-of-condition character – Nick Nolte and former Kiss rock star Gene Simmons were considered – but when Commando was picked up as a Schwarzenegger movie by producer Joel Silver, the tone began to change. Screenwriter Steven E. De Souza (who’d later write, among other things, the classic Die Hard) shifted the tone to suit Schwarzenegger’s heroically buff image, with some zinging one-liners to match – not least the superb quip, “Remember, Sully, when I promised to kill you last? I lied.”

The marketing for Commando was one of the great teases of the mid-1980s. I can still remember the poster and video sleeve, which offered nothing more than an image of Schwarzenegger, dressed in combat fatigues and armed to the teeth, staring straight down the lens with cool resolve.


All of this strongly implied that Arnold would spend pretty much the whole film running around dressed as a soldier, probably killing bad guys in a forest somewhere. In reality, the greater share of the movie sees Matrix at large in a fantastical version of Los Angeles, where mall cops can be thrown down escalators and shots fired in a shopping precinct without an armed response team being called, and where local gun shops have missile launchers and colossal military-grade machine guns secured out back.

It takes absolutely forever for Matrix to finally don the fatigues and get down to business, and I can still recall the frustration of myself and my friends as we lay in front of the television, fists balled under our chins, watching Commando on VHS in the early ’90s. “This is good and everything,” we said, “but when’s he going to get a machine gun and grenades and stuff?”

It’s around the 60 minute mark before Matrix finally puts the war paint on, and boy is the wait worthwhile. Mark Lester isn’t what you’d call a director with a singular vision or even much in the way of finesse. But in Commando’s clumsiness lies its charm; there’s something cute about the production’s ragged edges, where you can see mannequins standing stock still in the midst of an explosion, or the air rams designed to launch extras into the air when a grenade explodes.

There’s a sense, too, that actor Vernon Wells, who came to America to make his fortune after tearing up the screen in Mad Max 2: The Road Warrior, knows what he’s gotten himself into here. He cackles and sneers his way through the role of Bennett, a mercenary with an axe to grind with John Matrix. 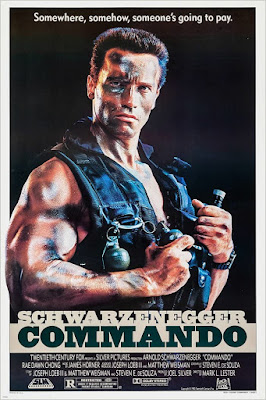 As Rae Dawn Chong points out in one of the Commando disc’s extra features, it feels uncannily like Matrix and Bennett are ex-lovers going through a messy break-up, their pent-up sexual fury manifesting itself as a string of steamy homoerotic knife-fights. Nominal villain Arius barely gets a look-in, probably because Lester realized that the Matrix-Bennett smackdown is where the gold lies. Their climactic fight, I’d argue, is the closest ’80s action cinema got to the fireside wrestling scene from Women in Love. You can sense the sexual tension in the air when Bennett screeches the golden line, “I’m not going to shoot you between the eyes, John! I’m going to shoot you between the balls!”

Lester himself later said that he regarded Commando as an intentionally over-the-top piece of Warholian pop-art. I’m not sure if that’s true or whether he’s rewriting history for himself; when he shot Commando 30 years ago, could he or anyone else have guessed that people would actually be talking about it in the 21st century – let alone releasing pristine home versions of it where you can see the joins in the special effects? Then again, Lester may have a point; in his own way, Schwarzenegger cuts an archetypal figure in Commando that’s almost up there with Warhol’s multiple prints of Elvis dressed as a cowboy.

Sylvester Stallone may have thought he’d cornered the market in the super soldier stakes with Rambo, but Schwarzenegger cuts his own furrow as Matrix. Stallone was always the hangdog soldier scarred by his experiences as a killing machine; Schwarzenegger, on the other hand, is more like a god who’s arrived on Earth and quite enjoys gunning down all these puny goons who keep getting in the way of his massive machine gun.

The level of violence in Commando resulted in several scenes being trimmed on its UK release. The most significant edits were made to the scene where Schwarzenegger uses a garden shed full of tools – rakes, axes, circular saw blades – to murder a bunch of unsuspecting soldiers. Those scenes are now back in their gory glory in Commando: Director’s Cut, which also adds about two minutes of dialogue and alternate takes that were absent from the original theatrical edit.

Commando didn’t make as much money as First Blood Part II, released earlier in 1985, but the image of Schwarzenegger getting tooled up before his assault on Arius’s house had its own cultural impact. That sequence was lifted wholesale and recreated with pixel graphics for the classic arcade shooting game Operation Wolf, released in 1986. The soldier you play in that game also appears to be modelled on Matrix, and even shares the dangerous habit of hanging grenades from his fatigues by their pins.

Looking again at those dangling grenades on Commando’s cover, and it strikes me that it’s the perfect summary of the film’s charm. For all its bloodthirsty violence, there’s an innocence to the film. Schwarzenegger gets away with doing all kinds of horrifying things because he inhabits the same role we do as a viewer – he’s acting out the fantasy of a soldier and enjoying every minute of it. Sure, he gets stuff wrong, like hanging grenades by their pins, meaning tripping over could set one off, but that’s okay – we’d probably make the same mistake in that situation.

Before the first-person shooter existed, Commando was the closest we could get to being a cast-iron super soldier. For those 100 glorious minutes, we get an inkling of what it must have felt like to be Schwarzenegger in his ’80s prime. And boy does it feel good. --Den of Geek