It’s not often we get to talk about Balinese cinema at SCM, let alone Balinese horrors based on indigenous mythology with a Western sensibility in mind. That’s exactly what Leák – or, as it’s more commonly known, Mystics in Bali – is: A locally-produced melting pot of incompetent direction, terrible acting and amateurish production, combining two completely different approaches to film-making into a single, barmy, unforgettable spectacle.

This is a hodge-podge of a picture, make no mistake. The plot goes as follows: A young, American black magic scholar, Cathy Kean (Ilona Agathe Bastian) and her Indonesian boyfriend, Mahendra (Yos Santo), encounter an ancient crone (Sofia W.D.), who seduces Cathy into the secret art of Leák (pronounced lee-ack) magic. As Cathy gradually descends into sorcerous malediction, Mahendra entreats his healer uncle (W.D. Mochtar) to fight the Leák Queen and her new, indentured servant.

The opening credits features the Leák Queen manically dancing in front of a black backdrop, as frantic tribal drums thunder in the speakers and the text rolls onscreen. It’s a striking tableau that recalls Dario Argento, and wouldn’t be out of place in something like Suspiria, but it also helps set a batshit insane tone that continues throughout. Whether it be a floating head, entrails dangling down, hurtling through the Balinese night or human-animal transmogrification, Mystics in Bali is a simultaneously hilarious and creepy sit that rarely lets up on the laughs or bizarre, out-there imagery.

But first, let’s talk about those floating heads. In Balinese folklore, Leák spirits are capable of transforming into Penanggalan, which are female heads that float through the air and, get this, feeds upon the blood of pregnant women and their newborn infants. That’s exactly what the hypnotised Cathy does in Mystics in Bali – she flies through a house, hurls a woman through a wall and murders a pregnant woman by sucking out her baby, all while the victim’s stomach visibly deflates and Cathy, unblinkingly, stares straight ahead.

This comes after the Queen has drawn a tattoo on Cathy’s thigh with her seven-foot long, electricity-tinged tongue, which Cathy takes like a champ: Staring vacantly, looking nonplussed. Bastian treats every scene in this manner, and I theorised that the producers cast the first white actress they could find because this woman has the emotional range of a stapler and the physicality of a mop. She seems to have been cast specifically to adhere to the film’s ostensible Western styling, but she looks physically uncomfortable in every scene, especially when she has an impromptu laughing contest with the Queen for a full minute. 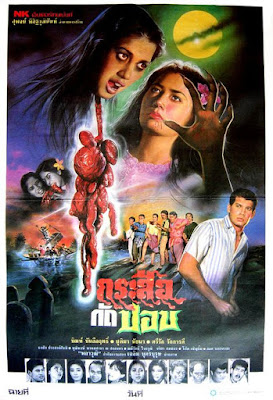 I wasn’t far off. Bastian wasn’t an actress at all; she was, in fact, a German tourist that director H. Tjut Djalil happened to meet in an airport. Quite how he convinced her to join the production I’m not sure, but the result is hysterical. As if she wasn’t unqualified enough already, the narcoleptic dubbing she receives is excruciating. “Without you here,” she says to Mahendra, “I’ll be sad and depressed.” “That’s why I want to learn about Leák mag-ek,” she drones. At least she isn’t singing or dancing as per the contemporary, Bollywood-ised standard for Balinese/Indonesian cinema.

The inanity of her lines is mirrored everywhere else, both in the lines themselves and the quality of the performances. Most of the other actors – and their dubbing counterparts – fare little better. Santo’s moustache has more charisma than him, as do his ill-fitting board shorts, and he sounds a little like a Xanax’d Zapp Brannigan. Most of the other players barely even register. Only Sofia W.D. rises above her terrible material, madly cackling after every other line in traditional witchy fashion for extended periods of time. It helps that her dub sounds like a cross between Yoda and Rita Repulsa.

It’s a wildly entertaining ham of a performance that brings a huge amount of life to an otherwise plodding, scrappily-edited mess. At one point, Cathy and Mahendra must obtain 6 pints of blood for the Queen; the film cuts straight from the issuing of the task to the completion of it, with no explanation offered as to how they procured this blood. There are very few transitional shots in general, and the film regularly cuts from place to place without warning.

The mad transformation scenes suffer for this too. Take the pig scene: It goes from crude but effective, An American Werewolf in London­-style make-up to wearing giant pig suits (with breasts) that look like human-sized condoms with porker snouts, to actual pigs wandering through the woods. This would be fine if the shots weren’t so hastily pasted together with wild camera swings hiding the seams. Immediately following this transformation, the film shifts back to Cathy and Mahendra wandering through town as if nothing happened.

While abrupt, this does lend a surreal, dream-like quality to proceedings, especially when the imagery emerges from the shadow of camp and into the genuinely off-putting. At one point, Cathy wakes up and starts vomiting green goop with white mice in it. It’s a disturbing image that’s immediately ruined by Mahendra, hilariously, saying, “Maybe it was something you ate.” This moment also calls into question how much of the past half hour or so was based in reality, enhancing the somnambulist atmosphere. Whether that’s accidental or not, I’m not entirely sure, but it works nonetheless.

The strange editing makes more sense when we consider that this 86 minute cut of the film was heavily trimmed from the original 110-minute version. There seem to be a lot more scenes spent developing the romance between Mahendra and Kathy, and the ending isn’t nearly as rapid (though it is still rather sudden and bleak). I can’t find a subtitled version of the full-length film, but I doubt I’m missing much. The widely-available version of Mystics in Bali is much more concise and exacting in its madness regardless, and the less we see of Santo and Bastian’s absence of chemistry the better.

The make-up effects on the Queen are, in fairness, quite convincing, with crazy grey hair and giant curved fingernails that almost seem to prefigure Freddie Kruger’s claw hands. The boils on her face are less convincing, as is the rubber model of Cathy’s floating head. It doesn’t look completely awful when it’s being hoisted on a string and thrown into people, but when the shot-on-video blue-screen is superimposed over the top it becomes laughable. Similarly, the final duel between the Queen and her hitherto unseen nemesis is one of the weirdest, most intense spectacles of low-budget schlock I’ve ever seen. I hesitate to spoil it too much but, among other things, they throw trees at each other. It’s amazing.

Mystics in Bali is precisely that – a bugfuck clash of genres, folklore and cultural sensibilities resulting in a trash opus for the ages. It’s strictly amateur hour, has no idea what tone is and relies heavily on endless shot/reverse-shot conversations, but it’s a treat to savour nonetheless, if only to relish Sofia W.D.’s performance and the indelible imagery of certain scenes. It was even banned in Indonesia for its depiction of cannibalistic spirits! What’s not to love? --Surprisingly Competent Media