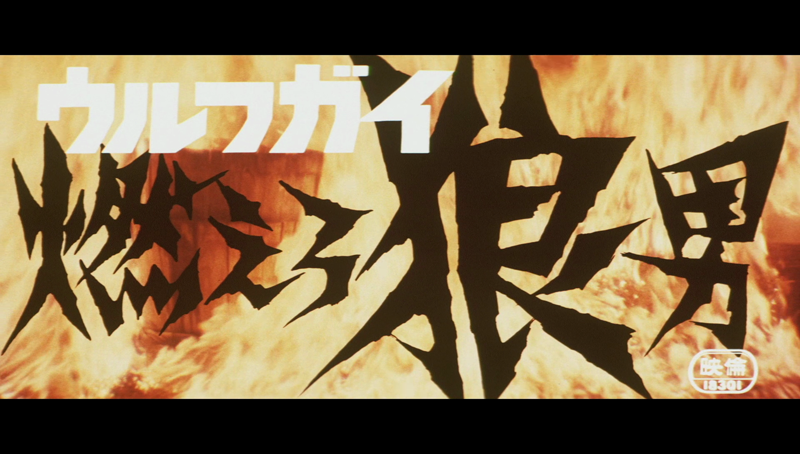 Kung Fu and lycanthropy: an irresistible combination if you ask me, and this fun Sonny Chiba movie proves it! Adapted from a popular manga, 1975’s WOLFGUY: ENRAGED LYCANTHROPE (URUFU GAI: MOERO OKAMI-OTOKO) was one of several dozen 1970s starring vehicles for JJ Shin’ichi “Sonny” Chiba, Japan’s answer to Bruce Lee, who’d shot to stardom a year earlier in the phenomenally popular STREETFIGHTER and its sequels. 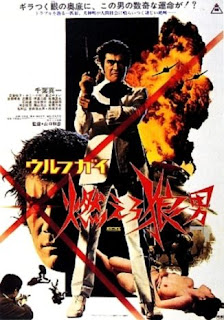 WOLFGUY, a quasi follow-up to the 1973 film HORROR OF THE WOLF, is certainly one of the most unique and interesting of Chiba’s 100-plus films, yet also, curiously enough, one of the most obscure. For decades it was presumed lost, and remains tragically little known.

A man freaks out in the middle of a crowded city street, screaming about seeing a tiger, and inexplicably dies, with his body bearing what look like tiger claw scratches. This sordid spectacle is witnessed by Inugami, a cop afflicted with horrific memories triggered by the assault.

Inugami is investigating the case of Miki, a popular singer who was gang raped and injected with syphilis. The assault was apparently ordered by Manabe Productions, the yakuza-riddled company for which Miki worked. Inugami tracks her to a nightclub where she’s performing, and from there she leads him back to her lair, where he takes out several of her yakuza tormentors by pelting them with coins. In the melee one of the yakuza undergoes a freak-out much like the one that occurred in the beginning, spasming and screaming about a tiger, and bleeding all over from seeming tiger claw wounds.

Inugami shacks up with Miki, and in the process discovers more about her. It seems she was killed by her tormentors, only to be brought back to life—in which guise she cursed the scumbags to be attacked by a spectral tiger.

This inspires Inugami to think back to how as a child his mother informed him that on the 15th day of every lunar cycle he’ll transform into a werewolf. He’s the last member of the Inugami blood line, with his relatives having all been massacred.

But then the Manabe lackeys capture Inugami and subject him to horrific surgical experiments. These include a blood transfusion in which one of the gang’s minions is given werewolf DNA.

Not that any of this matters, as the 15th day of the lunar cycle is at hand, and Inugami transforms—not into a wolf, but a more souped-up version of himself that can leap impossible distances and reverse the surgical injuries done to him. In this state Inugami breaks out of the bad guys’ compound and fights his wolf blood-transfused nemesis–the latter dies, however, due to the fact that human and werewolf blood apparently don’t mix.

Inugami decides to head back to the forest stronghold where his family originated. There he gets involved in yet more fights, and meets a hot chick who provides sex (of course), and also some vital information about Inugami’s unique heritage.

For what it is WOLFGUY: ENRAGED LYCANTHROPE works: it’s lean, unpretentious and ultimately (despite a rather abrupt ending) quite satisfying. It contains a great deal of nastiness, with the spectral tiger attack motif allowing for a lot of spurting blood. There are also plenty of kung fu fights, enhanced, as was the case with most martial arts films of the seventies, by outrageously over-modulated whishing and thwacking sound effects. There are also copious explosions and a great deal of gunplay in the final scenes, evincing a definite Sam Peckinpah influence.

The film is further marked by an outrageous funkadelic score, as well as the inevitable overuse of the zoom lens, outré camera angles and rudimentary psychedelic effects that mark it out as a quintessential product of its time. Yet it contains some genuinely wild and unexpected sights, such as that of Inugami’s exposed innards sliding back into his open stomach cavity, which then seals itself shut.

As for Sonny Chiba, he essentially essays the same role he did in better-known seventies programmers like THE STREET FIGHTER and THE BODYGUARD: that of a stoic and largely personality-free tough guy who never comes up short in a fight. The fact that he plays a lycanthrope here only enhances his particular talents. --The Bedlam Files