A Bullet for the General aka El Chucho Quién Sabe? (Damiano Damiani, 1966) 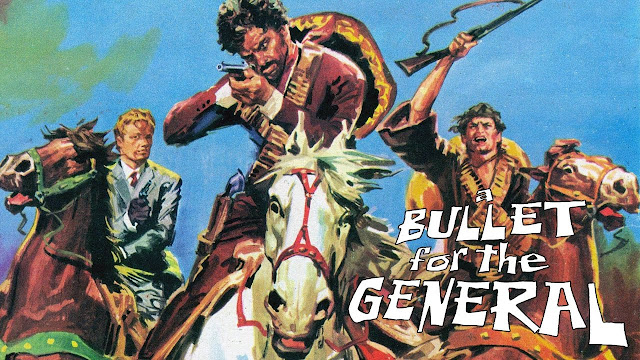 In revolutionary Mexico a group of bandits, led by a man called El Chuncho, attack a government munitions train. Things go not as planned, but the bandits get some unexpected help from one of the passengers, a well-dressed American called Tate, who subsequently joins the gang. He is baptized "Niño" because of his juvenile features by El Chuncho and the two men quickly become friends (and maybe more). When the American falls ill and El Chuncho starts searching his luggage, he discovers a golden bullet, but keeps suppressing the idea that Niño is a traitor. The bandits have planned to sell the stolen weapons to revolutionary leader General Elias, and when they arrive in the general's headquarter, it becomes clear why Niño has joined them ... 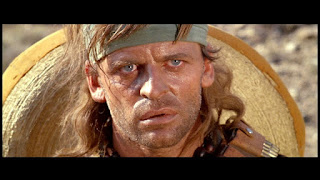 A Bullet for the General is a groundbreaking movie, the first real Zapata western, and according to some also the best. It was co-written by Franco Solinas, who had also scripted Gillo Pontecorvo's award winning La Battaglia di Algeri (The Battle of Algiers/1966 - Oscar for Best Foreign Language Film, 1967). Solinas would also be involved in the writing of two other political westerns The Big Gundown and Tepepa, while one of his writings (based on a play by Bertold Brecht) would be the starting point for Corbucci's Zapata western The Mercenary. It has been suggested that Solinas only saw this movie as preparatory study to Queimada (Burn!/1969, starring Marlon Brando), but he had great interest in Mexico and Pancho Villa's people's revolution. Furthermore he was present on the set most of the time, discussing characters and parts of the dialogue with the director and the actors, making adjustments when necessary. Two other people are listed as co-authors, but according to several people involved in the project, the movie was written by Solinas, Solinas and Solinas.

A Bullet for the General is usually interpreted as an allegory about US involvement in South-American politics. In 1966 there was no evidence of any illegal CIA activities, but there were plenty of rumors and it's hard to read the movie differently. Like most 'committed' screenwriters from the 60's, Solinas was a Marxist. Unlike the more impulsive Corbucci, he was a theorist, well-versed in Marxist philosophies, and this is inevitably reflected in his narratives and characterizations. In true dialectical style, Solinas' characters learn from confrontations with others who are at the same time their equals and direct counterparts. El Chuncho and his half-brother, the priest El Sancho, both serve the revolution, but while El Chuncho is an opportunist, his half-brother takes his revolutionary activities as serious as his banditry: when asked (by a fellow priest) how he can live with those bandits, he answers that Christ was crucified between two bandits and has always sided with the poor. Little by little, El Chuncho learns what a people's revolution is about, and when he is confronted with the information that the people of San Miguel have been massacred after they were abandoned by him, he is overcome by remorse and sentences himself to death.

Corbucci often defined his westerns as proletarian fables about the rich exploiting the poor. In A Bullet for the General things are a bit more complicated. The town boss Don Felipe is presented as a gentle person who has never committed any great acts of cruelty, but - in the words of the local revolutionary leader Raimundo - he has done nothing to improve the situation of the poor. This is closer to Sartre than to Marx: in existentialist philosophy a man is only free when he uses his freedom to take a stance: if he doesn't stand up against injustice, he confirms it, which is an act of injustice in itself. Tate is a hired gun who kills without any remorse, but he's able to feel friendship and what turns him into a villain, is the fact that he seems to lack any sense of the collective, which is, in Marxist views, a mortal sin: he saves El Chuncho because El Chuncho is his friend, but he thwarts the people's revolution because the people's cause is beyond his conception of life. He has saved EL Chuncho, but El Chuncho must execute him. Who knows why? The answer is: the anonymous mass he has betrayed, those poor people who have no voice know why. 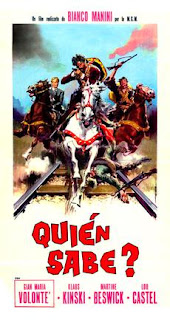 Art that is committed to a certain 'cause' (be it Marxist or anything else) easily falls into predictable patterns. Solinas' writings (and this film in particular) aren't entirely safeguarded against these liabilities, but in spite of his dogmatism, he was an inventive and resourceful screenwriter. A Bullet for the General is provocative, intellectually challenging, but also offers first-rate entertainment. The people's revolution is hailed but the revolutionaries are not romanticized, let alone glorified: the people aren't even capable of electing a new town boss without help, and the revolutionaries execute and slaughter simple soldiers in a murderous frenzy.

A Bullet for the General most certainly influenced Corbucci and Sollima, to mention only the most prominent Italian directors of political westerns. According to Alex Cox it also influenced Peckinpah's The Wild Bunch. Whether this is the best Zapata western in history or not, may be a matter of personal taste. I still prefer some of Corbucci's efforts in this direction. Solinas was a better screenwriter than Corbucci, but compared to Damiani, Corbucci was the more skillful director. Damiani's direction is adequate, but lacks Corbucci's ironic touches and dynamic force, notably during the large-scale action scenes. The film has a great look, thanks to the work of art director Sergio Canevari, costume designer Marilu Carteny and cinematographer Toni Secchi. For once we really get the feeling we're in Mexico. Even 'faces in the crowd' look Mexican. Performances are spot-on. Neither Volonté nor Castel is a personal favorite of mine, but they are both perfectly cast as the talkative bandit and the taciturn stranger. The Freudian overtones are so strong that it's hard to overlook the homosexual symbolism of the relationship. Kinski is a true attraction as the priest who kills without mercy but demands respect for the dead. Bacalov's score is excellent. --SWDB