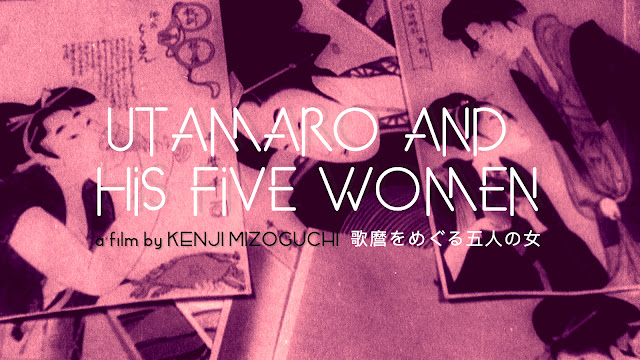 Utamaro was one of the first period films made in Japan under the American Occupation. The Motion Picture section of CI&E (MacArthur’s Civil Information and Education division, who were responsible for pre-production censorship) only approved the script after they had submitted director and producer to intensive and gruelling cross-examination and were assured that it fitted the ideological guidelines of the new order. In this early period, the Occupation censors were fearful of period films, which they erroneously believed to be the chief purveyors of undemocratic values – ultranationalism, feudalistic ideology and militarism. Mizoguchi had to assure them that there would be no swordplay and that his hero was a man of the people, a democrat ahead of his time. 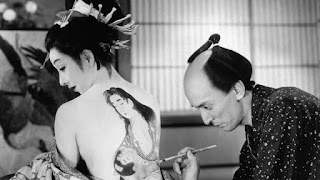 Many Japanese critics (e.g. Iwasaki, Sato, Shindo) believed that Mizoguchi was so hampered by the restrictions and his struggle to adjust to the new regime that the film failed to achieve the director’s usual high standard; but more recent re-evaluations (e.g. that of Kirihara) have found the film especially interesting as a reflection of the historical tensions of the era. The confusion and dispersion of the film’s narration, which the scriptwriter considered weaknesses that he was responsible for, no longer jar but, on the contrary, strike a modernist note. Many critics have also been attracted by the game of spotting the similarities between the film’s protagonist, Utamaro, and its director, Mizoguchi.

Mizoguchi’s regular scriptwriter Yoda, who worked with him (more precisely, for him) for 20 years, claimed in his memoirs that in the script for this film he was “almost unconsciously” drawing a portrait of Mizoguchi through Utamaro. The equation Utamaro=Mizoguchi has been irresistible to most critics as the two artists did have a lot in common. Both of them worked in a popular mass-produced medium operated by businessmen, and chafed under oppressive censorship regimes; both frequented the pleasure quarters and sought the company of geishas; but, most significantly, they both achieved fame for their portraits of women. In a highly charged scene in this film, Utamaro paints, directly on the back of a beautiful courtesan, a sketch that is later tattooed into her skin. One could say that this creative act (and the passion the artist displays in executing it) literalises the fact that both artists achieved fame on the backs of women – relying on them to arouse and express themselves, emotionally and aesthetically.

Utamaro worked in many genres (including porn) but he became (and remains) famous for his bijin-e (portraits of ‘beauties’). The genre was closely linked with the prostitution industry, as the prints were used as publicity for the courtesans, geisha and tea-girls who worked in the walled enclaves on the edges of Tokyo and Kyoto, euphemistically known as the Floating World, that serviced masculine desire with wine, women and song. Mizoguchi also worked in many genres, but became famous as a director of women’s films, especially films on the lives of prostitutes, geisha and fallen women. Both artists relied on artistic collaborators – wood carvers, colourists and live female models in the case of Utamaro; scriptwriters, photographers and star actresses, in the case of Mizoguchi. Mizoguchi’s artistry had a symbiotic relationship with the oppression and suffering of women, which generated in him a powerful attraction, emotional identification and rage. This has been partially attributed to his personal experience, episodes of which bleed into his films. (His sister paid for his education by becoming a rich man’s mistress; a geisha lover once attacked him with a knife in a fit of jealousy; his wife went mad.) Pascal Bonitzer (in the most penetrating essay on Mizoguchi’s cinema that I have read) argues that Mizoguchi was so enraged by the sins of Japanese men against Japanese women, and in particular at the sexual violence perpetrated against women, that, in a horror of penetration, he even refused to allow his camera to penetrate the scene of the crime – to reveal everything – and thus explains the director’s preference for the long lateral travelling shot, and his distinctive method of hiding acts of violence behind props or walls within the frame or locating them off-screen altogether. With the violence almost always off-screen, the horror is conveyed in the traumatised face of the victim – or onlooker.

The five women of the title – the refined courtesan Tagasode, the fiery geisha Okita, the respectable artist’s daughter Yukie, the shy peasant girl Oran and the plain artisan Oshin – cover a range of feminine types and personalities but they are alike in two respects. They all actively pursue the object of their desire, however puny he may be. They also share a respect for the power of Utamaro to make them famous in life, if not posthumously, to render them eternally young and beautiful. (These women had in fact very brief careers. Under the ruthless system of exploitation that operated in the pleasure quarters, young bodies were required. In the rapid turnover of staffing, they would be soon discarded and replaced by younger women.)


The film exposes both their pathetic vanity and the brutal lust and voyeurism of the male artist – who is often one of their clients, and certainly a servant of the system that exploits them. In the two crucial scenes when Utamaro, who has been suffering from a creative block, is first turned on and then artistically inspired by the bare body of young Oran, Mizoguchi prefigures and extends (beyond the West) the thesis of John Berger and the whole feminist critique of the functioning of the female body in art. --Senses of Cinema