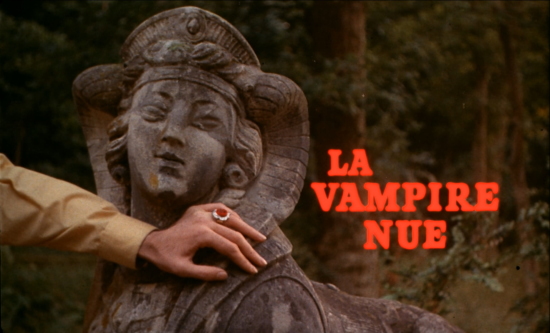 Jean Rollin’s second French feature (following The Rape of the Vampire ['68], and the incomplete L'itinéraire marin ['63]), and the second of his infamous erotic horror pictures, The Nude Vampire ('70) applies the cult auteur's trademark ethereal, opulent eye to rather standard vampire tropes. The tale of a wealthy industrialist (Maurice Lemaitre) who keeps a gorgeous young bloodsucker (Caroline Cartier) in his urban chateau, allowing her to prey on a suicide cult while scientists analyze her blood, it's a dizzying work of dreamlike malaise. Through this nymph, the rich man hopes to uncover the key to immortality, but his son (Olivier Rollin) falls in love with the beauty and becomes determined to free her. Set against a backdrop of Gothic castles and windswept beaches, the deadly familial showdown is observed with an omnipotent detachment, placing us in the shoes of lustful Gods who never pass judgement on those involved.

La vampire nue opens with scenes of science and mysticism working in complete synergy; a naked woman, hooded, donates blood in a lab. Far from the sterile environment usually associated with this type of setting, the brightly colored bottles on display and the contours of exposed flesh elevate the mundane to the magical right from the first frames. Next, the unnamed female protagonist (Cartier) explores the drab streets of modern day Paris with timid curiosity, reminiscent of the wide-eyed wonder of the subject of Sir Frederic Leighton's painting Flaming June (1895).

As Cartier's enigmatic center continues her trek, being watched from afar by a collection of pagan-masked hooligans looking to scoop her up off the streets, she enjoys a chance encounter with Olivier Rollin's equally striking male answer to her waifish awe-struck presence. It's this meeting of
innocents (despite one of them perceived as being a nefarious creature of the night) that allows the filmmaker to dive into his dissection of Parisian class structures, and the upper crust's elemental desire to extend life to infinity, just to further indulge bourgeoise whims. 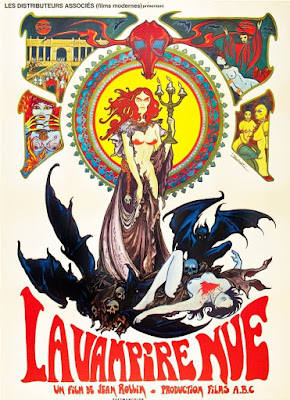 For Rollin, the vampire became a symbol that staunchly stood against the ways the mythical creature was used by his English genre contemporaries and predecessors, as the essay continues:

Rollin subverts the trope of the vampire into one of enlightenment and transcendence, a far cry from the bloodsucking wretches hiding in the shadows of Hammer Horror. For Rollin, the vampire becomes a totem for the evolution of humanity: a master race, immortality brings a new independence from petty economic concern; carnal obsessions of the flesh are replaced by messages of purity and love.

...individuals looked for spiritual meaning in a world fueled by sex, drugs, rock 'n roll, the fetishizing of commodities, and political unrest. As Christopher Partridge outlines in The Reenchantment of the West, 'As the inclusion of individuals such as Crowley on The Beatles' Sgt. Pepper cover, and the title of The Rolling Stones' Their Satanic Majesties Request ('67) suggest, even during the 1960s the truly eclectic nature of the occulture was becoming apparent.'

Perhaps this is part of Rollin's movies' appeal: the simple fact that they work as pop alchemy; combining symbols, fashions, sounds and artistic ideas into works of cultural dissection, singular in vision and execution. As Ellinger notes, Rollin was always reluctant to discuss influences to any meaningful degree, even if he "openly acknowledged his adoration for classic French filmmakers like Georges Franju, and also spoke about the art of Clovis Trouille or the poetry of Tristan Corbièrer." He was an artist making movies that reflected both his fetishes and observations regarding his home country's moral erosion, filtered through several lenses that combined into a signature style, never speaking about his work pretentiously in interviews and insisting that (like other great French Symbolists), "we use the light of our own imaginations to lead the way." -- Birth Movies Death