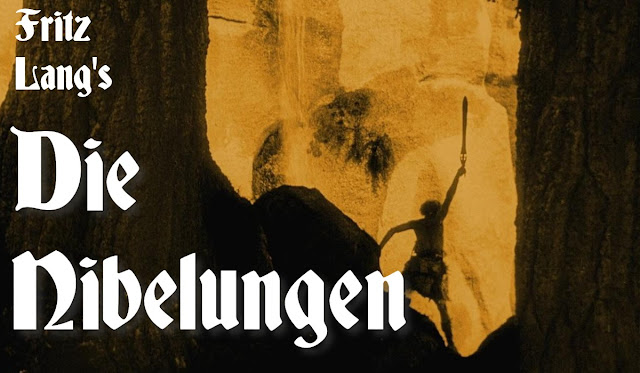 According to consensus, Metropolis is the undisputed heavyweight champ not only of Fritz Lang’s filmography, but also of German silent cinema. Given how few of us are pressing for a general reappraisal of the silent canon, that’s unlikely to change, though a case can and should be made for Die Nibelungen. Such a case would, necessarily, wage an uphill battle against implications of infamy: Adapted from the epic poem Nibelungenlied, Lang’s two-part movie has a largeness that exceeds its own dimensions. It appeared at a time when the wounded pride of Germany was well on its way to becoming insular nationalism. Hitler, who would (through Goebbels) attempt to become one of Lang’s patrons, was said to have broken down and wept during Die Nibelungen. (A bowdlerized Siegfried was rereleased in 1933.) Thus, an epic which opens with the title card “Dedicated to the German people” alights on the timeline that connects Teutonic legend with the Shoah, beholden to the former and not unequivocally blameless for the latter. Lang, of course, was horrified by Hitler, taking flight to France when Goebbels offered him a chance to take charge of film production during the Third Reich. The same horror, compounded with the shape and sensation of a noose tightening around one’s neck, informed almost everything he made thereafter, until the end of his career.

But the legacy of Die Nibelungen as a Nazi touchstone is decidedly more circumstantial than instrumental. A more ill-fitting emblem of the Reich is inconceivable, if for no other reason than the second half (Kriemhild’s Revenge) spoils and razes the triumphant construction of Siegfried, inscribing a trajectory that voids any hypothesis for the eternal superiority of Aryan might (of which there’s scarcely any in Siegfried, in spite of Paul Richter’s macho poses), precognitively rendering the Nazi prophecy, the reign of a thousand years, in smoldering ashes. At the time, the public and the press tried to ignore Kriemhild’s Revenge, and treated Siegfried as a standalone masterpiece. Time and advanced viewership may allow us to better regard the two pieces as an even greater, and more terrible, work of art than Goebbels dreamt of in his philosophy.

The all-consuming fire returns, time and again, in the form of chemical plant conflagrations (The Testament of Dr. Mabuse) or pots of hot coffee (The Big Heat). Earth-shaking explosions are used again and again, with too many examples to name. Most significantly, Lang would return, on countless occasions, to the device of predestination—the frequently lethal compound structure of choices, inner nature, and the inexorable progress of events.

Everywhere in Lang is a picture-box image of crosshatched lines, meshed teeth, or foregrounds imposing and imprisoning backgrounds—or vice versa. In Die Nibelungen, the frames are filled with UFA’s most lavish set construction and wardrobe design, to a degree of splendor that rivals Eisenstein’s Ivan the Terrible series. As the budgets for Lang’s B movies were depleted over his final working decade, emptiness and despair needed no longer to be sublimated by theme, but were fully expressed by cadaverous, blank backgrounds and the final erasure of heroism as a substantive force. --Slant