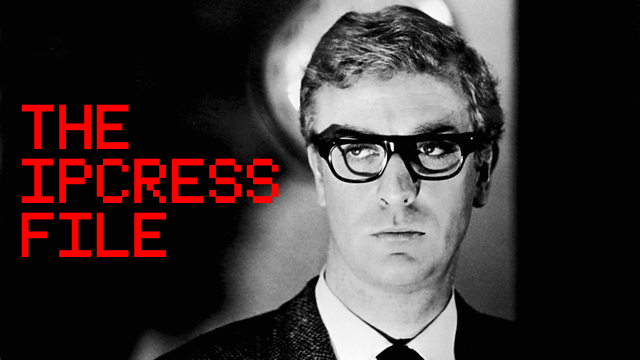 A first-rate British spy thriller directed by Sidney Furie, The Ipcress File (1965) is based upon a novel by Len Deighton (the first and best of the spy films based on his novels; the others being Funeral in Berlin (1966) and Billion Dollar Brain (1967). It stars Michael Caine as Harry Palmer, a spy who was railroaded into his profession against his will. A talented thief, Palmer was caught stealing and offered a position as an undercover espionage agent, or face a stint in prison. Choosing the former, our hero finds himself assigned to a case involving a missing scientist. Harry's job is to locate the kidnappers and cut a deal with them to release their prisoner. Although he succeeds in rescuing the abducted scientist, the victim appears to have been brainwashed. This complicates matters further, forcing Palmer to locate and expose the kidnappers while trying to comply with the secret agenda of his superiors. 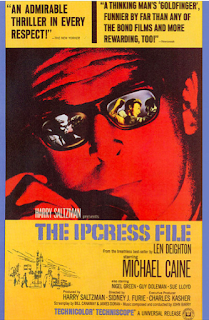 Producers Harry Saltzman and Albert "Cubby" Broccoli, the team behind the James Bond films, decided to move away from the escapist nature of the O07 series and create a more realistic espionage agent with Harry Palmer. Unlike Bond, Palmer doesn't battle superhuman villains nor does he have a set of fancy gadgets to help him out of trouble. Harry is a thinking man's Bond; a meticulous professional who uses his wits to get the job done, regardless of his personal feelings about his line of work.

As Harry Palmer - a complex and cerebral character - Caine delivers a terrific performance in his first major starring role, one that showcases his subtle wit and cynical nature. His performance earned him numerous critical accolades and he followed The Ipcress File with an even greater success - his portrayal of a predatory playboy in Alfie (1966); it won him an Oscar nomination for Best Actor. Interestingly, Caine was not the first choice for the role of Harry Palmer; that honor went to Christopher Plummer, but he turned the offer down to star in The Sound of Music (1965). Producer Saltzman had just seen Caine in a supporting role in Zulu (1964) and sensed his potential as an actor. When he happened to spot the actor eating dinner in a London restaurant just days later, he promptly offered him the role of Harry Palmer and gave him a seven-year contract!

Caine recalled the making of The Ipcress File in his autobiography, What's It All About?: Michael Caine: "In Ipcress we used the basis of Len's story but it fell to all of us, and me in particular, to create our own dialogue. Fortunately most of us were good at this and a lot of it turned out to be quite funny - but it was a nerve-racking way to play one's first starring role. Sid (Sidney Furie) also decided to shoot it as though the camera were someone else watching while hiding behind things. Thus there always seemed to be something between me and the camera, or else it would be very close and at an unusual angle, often shooting straight up my nose. Sid and Harry (Saltzman) had a lot of rows, with Harry's temper living up to its reputation. I sometimes feared that he would have a heart attack, while the rest of the unit were hoping that he would - Sid, in particular. The climax to all these rows came one day when we were on location in Shepherd's Bush, a rundown area of West London. The first I knew of it was when Sid came running round a street corner and knocked me flying. To my astonishment, I saw that he was crying. He stared at me for a moment and then screamed through his tears, 'F*ck it, I'm off this picture,' and with one bound jumped on a number 12 bus that was just pulling away from its stop, and disappeared in the direction of Oxford Circus." Luckily, Furie was coaxed back to the set and completed the picture. But that incident was just one of many that involved the volatile director. For example, Furie hated the script so much that on the first day of shooting he set fire to it on the set. At the same time, producer Harry Saltzman hated Furie's baroque framing technique so intensely that he had him barred from the editing room. Furie later claimed that the producer actually excluded him from the film's party at Cannes and even stole his Best Picture British Academy Award!

Yet, despite the ego clashes behind the scenes, The Ipcress File remains one of the most entertaining and influential films of the spy genre. And Furie's stylish direction and visual ingenuity (the exchange of prisoner and payoff in an underground parking lot, with machine-gun retainers moving in ritualized symmetrical patterns) created the patent for many of today's thriller cliches. --TCM