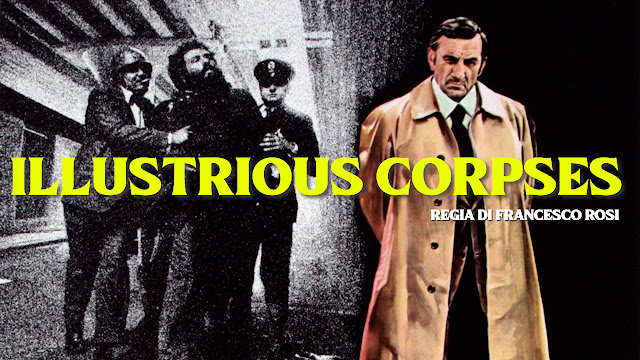 Rosi calls Illustrious Corpses "a trip through the monsters and monstrosities of power." A detective thriller cast in the mold of a political exposé or vice-versa, it is the story of a mysterious killer (or killers) whose victims are judges, public prosecutors, and magistrates. The dogged, Marlowe-like detective who follows this morbid trail uncovers a nest of corruption at every cultural and political turn: every witness, indeed every institution in Italian society, has a stake in the collapse of the judiciary. Rosi's most despairing comment on absolute power and corruption is also his most stylistically distinguished. From the famous opening sequence in which the mummified magistrates sit upright in the catacombs, "Rosi shows such a majestic, ominous spatial sense in this movie that at times it seems to be an architectural fantasy about a country of the dead." (Pauline Kael) Lino Ventura as the melancholy detective is joined by a star cast including Fernando Rey and Max von Sydow --BAMPFA