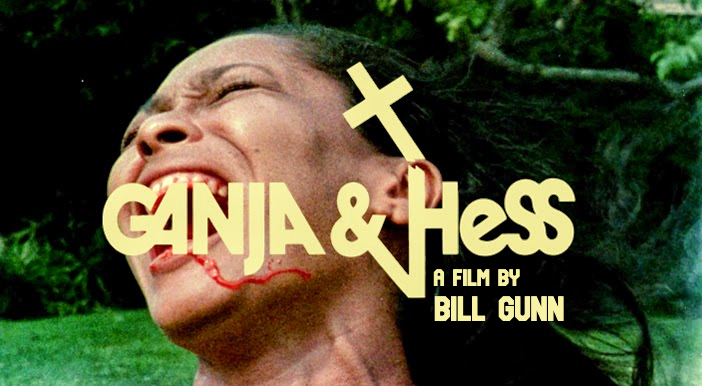 Bill Gunn’s black vampire film Ganja & Hess premiered on April 20th, 1973, eight months after AIP’s Blacula cleaned up at the box office. Its financiers saw an opportunity for a quick cash-in: if black audiences wanted black-centric horror, it was cheap and easy enough to give it to them, as evidenced by bottom-feeding quickies like Blackenstein and Dr. Black, Mr. Hyde. But Gunn’s film was something quite different, and less than a week after its premiere it was pulled from release. From there it was re-cut, retitled and forgotten - until a grassroots movement to restore the film finally culminated in a DVD release a quarter century later. Though missing out on the VHS and cable boom of the 1980s might have robbed it of any potential cultural cache, Gunn’s vision was in all probability too ephemeral and oblique a tale to have ever scored any real mainstream success. Even today, miraculously restored on Blu-ray, its power will only reveal itself to the patient and open-minded, who’ll discover a challenging but rewarding fable with a voice like no other filmed work.

While the film was pitched (and financed) as an exploitation horror flick, it’s closer in tone to ‘70s art films like Nicolas Roeg’s inscrutable The Man Who Fell To Earth, which Ganja & Hess predates by three years. Writer/director Gunn allegedly filmed a script which contained more traditional, mainstream horror elements, but later claimed he intended all along to remove most of them, leaving a frustrating but weirdly resonant meditation on addiction, isolation, and the existential struggle of the “Blackman” (Gunn’s term) to retain his identity in a culture that seems to demand either assimilation or extinction. 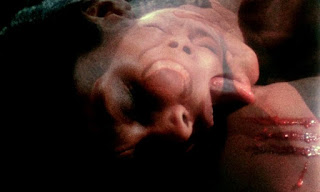 Gunn’s preoccupation with the slippery nature of identity is signaled early on: the film begins with a minister (Sam Waymon) discussing his faith via voiceover, accompanied by handheld, documentary-style shots of him commanding a Christian church service. But we soon find out that the minister’s main job is quite different - he’s a driver for Dr. Hess Green (Night of the Living Dead’s Duane Jones), and we learn from some oblique exposition that this well-to-do “doctor of anthropology and geology” is studying artifacts from an extinct civilization of African blood-worshippers called the Myrthians. Hess lives alone on a sprawling estate, surrounded only by his artifacts and servants. (As the surviving crew members note on the Blu-ray commentary, seeing a respected, affluent black man being chauffeured around New York in a Rolls Royce was at the time quite a bit of culture shock, and was likely a hell of a way to start your film in 1973.)

Hess studies dead civilizations; the lonely scenes captured by Gunn’s camera suggest the doctor is also part of one. That’s about as overtly political as the film gets: there are no rallying cries for equality or clumsy speechifying about race, just frame after frame of Gunn’s Blackmen occupying near-deserted bars, sparsely populated streets and big empty rooms. Even dialogue scenes are framed in ways that isolate the individual. As Hess quietly ponders a relic and dozes off, dreaming of ancient Myrthia, there’s a genuine feeling of mournfulness, of memory bleeding out into history, on its way to being forgotten forever.

The film’s plot, such as it is, is set in motion when Hess hires George Meda (played by Gunn) as his assistant. We find out as abruptly as Hess does (which is to say almost immediately) that Meda is quite out of his mind. After their first dinner together, Hess finds Meda sitting in a tree, threatening to hang himself in Hess’ yard. This is easily the film’s funniest exchange, in which Hess asks Meda to consider the amount of trouble his suicide would bring to “the only colored on the block.” Meda then gives a long speech about his suicidal impulses with a stalactite of snot dangling from his mustache. It’s a moment that tells you much of what you need to know about where this stubborn, uncooperative film is coming from. In the very next scene, for reasons which we’re never sure, Meda attacks Hess in bed, stabbing him with the Myrthian dagger. 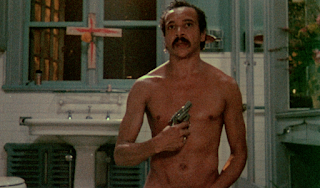 Thinking he’s killed Hess, Meda takes a bath, brushes his teeth (using his bathwater), and shoots himself. Next, Hess is seen sitting up in bed, no worse for wear, and upon discovering Meda’s body begins to drink his blood. Much of this film can’t rightly qualify as horror, but the sight of Jones slurping congealed blood off the bathroom floor is a moment of genuine revulsion (allegedly for the actor as much as the audience), and says everything the film aims to about addiction.

Meda’s corpse ends up in Hess’ walk-in freezer, and Hess begins the life of an addict - petty theft from a blood bank, cruising bad neighborhoods for his fix. The commentary isn’t terribly subtle here, but it’s delivered with a measured hand. Soon Meda’s estranged wife Ganja (Marlene Clark) shows up looking for him. From here the film becomes a kind of love story, before sending the title characters down a road of increasing debasement and self-loathing to feed their craving. As their addiction brings them together, it slowly drains their humanity and isolates them from the world.

On a first viewing, the film often feels a bit patchwork and unwieldy in trying to get even the basic narrative setup across, as if Gunn has so much to say, but is battling his own framework in the process. And his subtext feels at times as confusing as his talky, wandering narrative. The Christian church scenes are messy, sweaty bits of handheld vérité, while the flashbacks/dreams of the Myrthian Queen are shot in loving, elegant slow motion. Is Gunn criticizing the Western European eclipsing of African culture? It often seems so, but the film’s resolution suggests otherwise.

Similarly, posing Ganja and Hess as a well-off black couple in 1973 seems a deliberate, progressive stance. But why are they then portrayed as such assholes about their status? Hess’ black butler is a constant object of their ridicule and derision (by Gunn as well; the director literally robs him of all identity in almost every shot, his head cut off by the top of the frame in nearly all of his scenes). Is the filmmaker criticizing Ganja and Hess for their bourgeois social status, or the butler for his willing subjugation? Or both? And the film’s final shots are guaranteed to frustrate as much as they resonate.

But what seem like problems with the film begin, on repeated viewings, to feel like stubborn badges of honor. And you begin to realize it’s not that Gunn CAN’T make a more traditional story; he simply refuses to. (There are 17 minutes of deleted scenes on YouTube which connect the details of the evasive plot; Gunn shot them and threw them away.) There are just enough moments in the film to show you that Gunn could have easily gone a more mainstream route. The film is beautiful when it’s meant to be beautiful. The use of ambient sound is downright cutting edge for 1973. Gunn is not an amateur. But not every movie is willing to meet you halfway. There are films that are fun to watch; Ganja & Hess compels you to watch. There are films that ask more questions than they answer; Ganja & Hess answers zero questions, nor does it aim to. But maybe that’s why it lingers in the brain.

As the legend goes, Gunn took a single print with him to Cannes, where it received a standing ovation and was named one of the ten best American films of the decade. New York critics were less impressed, and Gunn’s film was pulled from release after playing less than a week in one theater, after which distributors hired another filmmaker to re-cut the film into the 76-minute Blood Couple (also released in various formats and markets as Black Evil, Black Vampire, Blackout: The Moment of Terror, Vampires of Harlem, and Double Possession). It’s a cheap bit of irony that a film rife with subtext about a dying culture devouring itself was carved up and shortened by over 30 minutes to make it more palatable to the blaxploitation crowd.

Gunn never directed another film (he started work on the Muhammad Ali biopic The Greatest, but was replaced by Monte Hellman). He returned to the stage and television, and ended up at the kitchen table on the set of The Cosby Show, playing one of Cliff Huxtable’s poker buddies. Gunn died in 1989, and as far as he knew, Gana & Hess was dead and forgotten, a perfect illustration of the cultural oblivion the film itself decried.

But in a bit of on the nose poetic justice, Ganja & Hess has refused to die. Battered and butchered 16mm prints played rep houses and museums throughout the 1990s. At some point Gunn had apparently stashed the print from Cannes at the Museum of Modern Art, and once the original negative was reworked, this became the only surviving version of Gunn’s original cut. A 1998 DVD restoration of this print brought the film to a new generation, and several years later an even more complete version was released on Blu-ray. (For the whole, amazing history of the film’s rescue from oblivion, check out the great Video Watchdog article by Tim Lucas and David Walker, reprinted on the video release. Reading it, one realizes it’s nothing less than a miracle that the film exists at all.) In 2014, Spike Lee stealthily remade the film, giving it a new title (Da Sweet Blood Of Jesus) but hewing so closely to Gunn’s original that the late filmmaker received a screenplay credit. This week the once nearly lost film is popping up in social media feeds as a black horror touchstone, taking its place in a sadly sporadic continuum that continues today with Jordan Peele's Get Out. Like it's lonely, cursed subjects, Ganja & Hess has spent years teetering on the edge of extinction. But with the help of its familiars, it has stubbornly clung to a tenuous - and much deserved - immortality. --Birth Movies Death