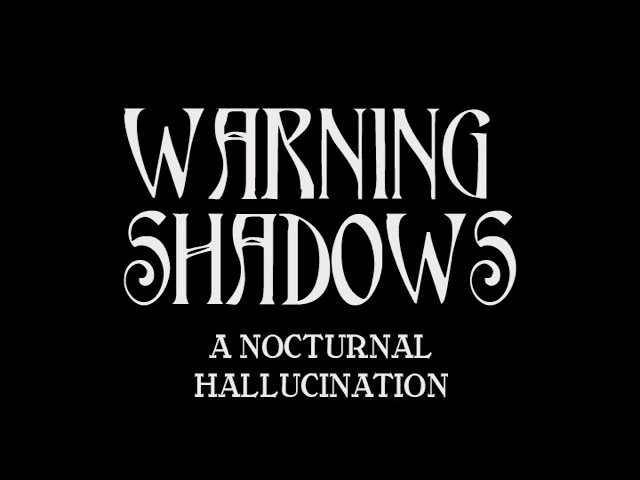 The cinema, more than any other art form, works by exploiting our often-shaky grasp on what is real and what is not real. Everything we see on the screen is at once itself – an object or face that has been photographed – and an illusory shadow of itself, which will vanish like some ghostly apparition the moment we switch on the lights. Cinema fascinates because we know what we are seeing is unreal, yet feel unable at the same time to deny its existence. As we once believed in ghosts or demons or angels and sought to commune with them in a myriad of ways, we now sit in thrall to alluring but ephemeral shadows on a cinema screen.

The German Expressionists of the 1920s had a more complex and tortuous love of shadows than any before or since. A shadow to them was more than a place on which the light did not fall; it was the secret and invisible space in which the true drama invariably played out. The actors, the costumes, the décor … all these made up the conscious ego of a film. The shadows were its dark and Freudian id. Lotte Eisner compared the Expressionists less to Freud than to Tieck, one of the more eccentric of the German Romantic authors. She wrote that:


"The rhyme of Schein (seeming) with Sein (being) […] leads them, like Tieck, to “juggle with reality and dreams until the forms born of the darkness seem the only genuine ones.” Life is merely a kind of concave mirror projecting inconsistent figures which vacillate like the images of a magic lantern, sharp-focused when they are small and blurring as they grow."

Just about every German Expressionist film plays out this concept to a greater or lesser extent. The one that most directly sums it up, however, is Arthur Robison’s Schatten – Eine nächtliche Halluzination (Warning Shadows, 1923).

The original title translates as “Shadows – A Nocturnal Hallucination”. There is nothing grandiose or gratuitous about this: the collective ‘hallucination’ experienced by the characters is not just a commentary on – or a distraction from – the main narrative; it is the very form and substance of the narrative itself. Nothing that actually happens in the film is of real or lasting importance. Yet the fantasies that assault them in their artificially created dream world are brutal, decisive and life-changing. 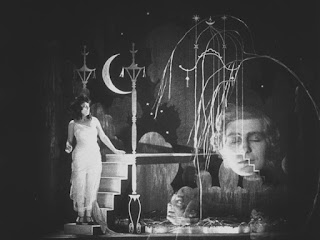 It takes place in the early 19th century, at a dull party in the home of an unhappy married couple. All four guests are male; each harbours a none-too-secret desire to sleep with the wife. A wandering illusionist entertains them with his ombres chinoises. He seems a world away from the magus or evil-genius figures seen in films by Robert Wiene, F W Murnau or Fritz Lang. He is no more than a mountebank, a cheap huckster who seeks to kill a few hours in exchange for a few coins. Yet by placing the characters under hypnosis, he lets them play out – in a realm of dreams – the passions they keep hidden within their subconscious selves. “In a state of trance,” writes Siegfried Kracauer, “they anticipate the future by doing exactly what they would do if their passions continued to determine their actions.”

As in a Freudian case history, the narrative splits into schizophrenic polarities of eros and thanatos, Sex and Death. The husband (Fritz Kortner) feels such a purely voyeuristic passion for his wife that he is unable (we strongly suspect) to consummate their marriage. Spying through curtains as she flirts innocently with her admirers, he sees their shadows merge in a tableau of group sex that is almost indescribably obscene. As she dances after dinner, the illusionist holds up a blazing candelabrum so her legs appear naked through her white muslin gown. Later, as they watch the play, the illusionist shines his light on her hand as the youngest of her suitors reaches out to touch it. In reality, their two hands do not make contact. Yet their shadows, cast on the floor, form the shape of an act of coitus in graphic close-up. 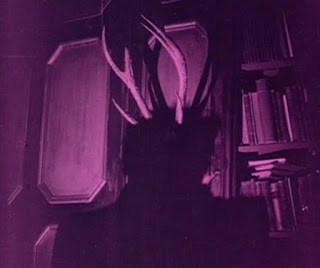 In the second half, these shadow-images of Sex give way inevitably to shadow-images of Death. The husband sees – again, through curtains – his wife’s shadow as she makes love to the younger man. In a homicidal rage, he has his footmen seize his wife and tie her to the dining table. The act is barely visible, concealed by the mise en scène like those acts of carnage that happen offstage in a Classical Greek tragedy. Yet it is magnified to lurid proportions by the shadows the actors cast on the wall. In a perverse tableau like something out of the work of Jules-Amédée Barbey d’Aurevilly, the husband compels his other guests to skewer his wife with long rapiers. This act evokes both an ‘honour killing’ and a gang rape. Again – mercifully, this time – we see nothing of the act. It transpires exclusively through shadows, the realm where the truth of the story lies.

Not that the shadow play in Warning Shadows ever shows what happens. It shows only what may happen if the subconscious drives of its characters are allowed to run unchecked. “Used by the magician for ultimately benevolent ends,” writes Thomas Elsaesser, “it ostensibly allows the characters to confront themselves, attain a degree of self-knowledge about their fears and obsessions, jealousies and murderous rages.” Graphic but illusory images of Sex and Death turn out to be harmless, even salutary. Yet a decade after Warning Shadows was made, the shadows in the German psyche sprang horribly – and all too realistically – to life. --Senses of Cinema