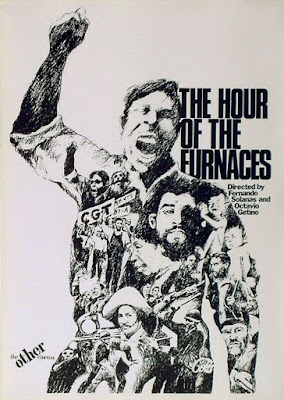 The title of this three-part agitprop documentary comes from a quote Che Guevara used to open what was to become his last public statement, the “Message to the Tricontinental”, in 1967: “It’s the hour of the furnaces and only the light shall be seen”. The author of the quote is José Martí, Cuba’s nineteenth century national hero. This double reference, to a revolutionary who died fighting Spanish colonialism, and to a revolutionary who had just died fighting neo-colonialism, cues the viewer to think of the parallelisms between contemporary liberation struggles and Latin American wars of independence in the nineteenth century; namely, a voluntarism and a nationalist anti-imperialism that effectively trumped other epistemological categories. In this regard, the film’s strong bias against validating questions of power that fall outside the realm of political economy is a reflection of its times. At the same time, however, this limitation should not blind us to the film’s greatest strength: the clear articulation of a revolutionary discourse through an equally revolutionary means of representation.

Shot clandestinely between 1966 and 1968, during the initial stages of what would come to be known as Argentina’s infamous “dirty war”, the film was screened clandestinely as well, to sympathetic audiences of workers, anarchists and revolutionaries who would regularly interrupt the projection to discuss concepts and issues raised in the film. Given the limits of space, I will focus on only one of these themes, the relationship between violence and liberation, by calling attention to the central role that violence plays in the dialectical unfolding of the film’s three part narrative, a narrative where Part 1 corresponds to the thesis of the current status quo; Part 2 to a prolonged antithesis of Peronist struggle; and Part 3 to a soon-to-be-achieved synthesis. Through this dialectical structure, the film rearticulates violence not only as a Marxist would – that is, as a symptom of the changes in modes of production – but also as a Leninist and especially a Maoist would: as a tool to be actively wielded against an oppressive status quo in order to overthrow it. - Senses of Cinema

Part I: Neocolonialism and Violence