World on a Wire aka Welt am Draht (Rainer Werner Fassbinder, 1973) 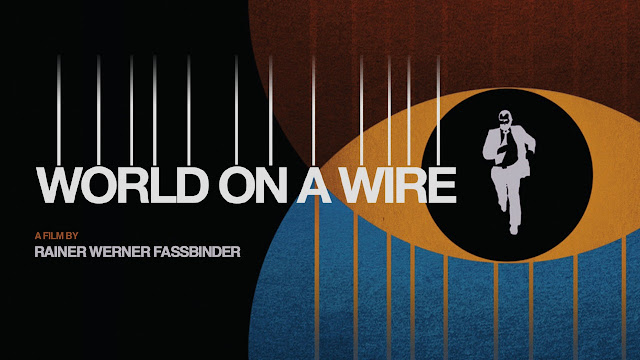 A tiny topless discotheque, somewhere in a future that looks very much like 1973, filled with bulked-up black bodybuilders, flexing and voguing in leopard-skin briefs; a zaftig blonde Euro-grotesque, wandering like a washed-up Heimatfilm Jayne Mansfield among the musclemen, tenderly caressing biceps and pecs as she passes; a blockheaded hero in a too-tight suit, caught between two (or is it three?) realities, and slowly losing his mind… Every story Rainer Werner Fassbinder ever told depicts a highly personalized social totality in miniature—“a world in a nutshell”—so why should his long-unseen foray into the speculative and inner-spatial realms of science fiction, World on a Wire, have settled for anything less?

A story of realities-within-realities, built upon the sort of Chinese box metaphysics that Philip K. Dick perfected and the brothers Wachowski would later make safe for multiplexes, RWF’s two-part, 205-minute television miniseries has finally been resurrected and returned to cocaine-mirror crystal-clarity in a new restoration supervised by The Rainer Werner Fassbinder Foundation and cinematographer Michael Ballhaus. Set largely in an Alphaville-esque Seventies-moderne Paris, World on a Wire might as well have been staged as a series of Roxy Music album covers in the anti-theater of the New German Cinema wunderkind’s desires. Every image teems with two-headed two-shots of echt Seventies film-scene lounge lizards (watch for a youthful Werner Schroeter and his ever-stunning muse, Magdalena Montezuma) and ever-more-paranoiac quasi-action film pirouettes (fistfights, little white Corvettes, screen-filling fireballs) as scientist/hero/sucker Fred Stiller (an athletic and, according to cast and crew members, deeply soused Klaus Löwitsch) falls ever deeper into the mirrorworlds of corporate cover-up and virtual realities behind “Simulacron,” a computer capable of modeling the future spending habits of potential consumers in cyberspace, all at Big Business’s malignant behest. 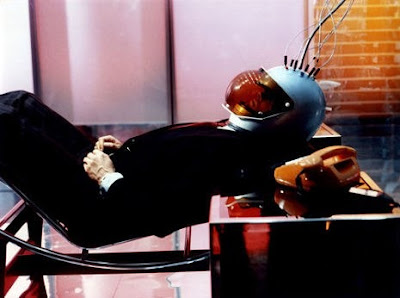 Shot during a pivotal moment in Fassbinder’s career, on hiatus from the lengthy production of Effi Briest and in the same year as Martha and Ali: Fear Eats the Soul, World on a Wire marks an unlikely genre-deviation from the director’s more typical lushly melodramatic and often gleefully embittered films. As a result, it deserves recognition on at least two planes of space-operatic history: first, as an accomplishment to stand alongside those great moments in television science fiction engineered by the extraordinary Nigel Kneale (Quatermass and the Pit), and second, as a decidedly auteurist celebration/rethink of two disparate though not entirely dissimilar sorts of cinematic science fiction.

The first of these lies in World on a Wire’s recurrent visual fascination with infinitely receding corporate office corridors framed with quattrocento perfection, a motif that’s less reminiscent of John Carpenter and Dan O’Bannon’s Dark Star than it is of Ernie Gehr’s optical compression chamber, Serene Velocity. That Fassbinder might locate his film’s future among the structures of Gehr’s impossible space-place suggests the range of the filmmaker’s resources. That he might upend the most famous moment in then-contemporary sci-fi—Kubrick’s deployment of The Blue Danube in zero gravity—while panning across a sideboard covered in cold cuts and congealed canapés during a cleverly calculated corporate press conference reveals the depth of Fassbinder’s furiously “fuck off” mirth in the face of forever constricted means. Made for German television’s Westdeutscher Rundfunk for, according to The New York Times, “900,000 Deutschmarks (more than $300,000 at the time),” World on a Wire actually enjoyed a rather lavish budget among RWF productions of the time.

As much as in, say, Robert Wise’s Executive Suite or Jean Negulesco’s Woman’s World, the face of corporate politics may belong to men, but its often bare and delicate backbone belies the strength of the women who actually give World on a Wire its spine. A pair of starlet turns send the film sensually into the stratosphere. The first of them is fully embodied by Barbara Valentin, perhaps best known as the bar owner and couscous-cookin’ lover of Ali in Fear Eats the Soul, here dazzling as the aforementioned Mansfield simulacrum sent to monitor Stiller’s industrial rise and fall. The second is a somnambulistically sultry performance by the breathtaking Mascha Rabben, who wafts through the proceedings as Stiller’s eventual lover and the daughter of his predecessor, the super-scientist whose disappearance initially sets the action in motion.

A head trip filled with headaches, set in a world where anyone might be an apparition and everyone behaves like one, World on a Wire is nothing short of a gale-force blast from futures past, and for longtime Fassbinder freaks or welcome newcomers to the fold, one of the cinematic (re)discoveries of the year.
-- Film Comment