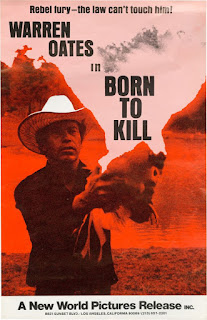 Had Monte Hellman's Two-Lane Blacktop received the attention it deserved upon its 1971 release, creating a tagline for his 1974 film Cockfighter would have been simple: "It's Two-Lane Blacktop with cockfighting!" Just as Blacktop offered total immersion in the subculture of illegal hot-rodding, the recently reissued Cockfighter—which, like Blacktop, was kept out of circulation for years—does the same for the unpleasant, widely illegal sport of its title. But Hellman chooses to overlook the familiarity of his themes, producing a film every bit as committed to its dangerous corner of the world as its predecessor. In one of the best performances of his career, Warren Oates plays a seasoned cockfighter who, because unwise words once cost him a chance at a championship, has taken a vow of silence until he can correct the mistake. After apparently bottoming out following a devastating loss to friendly rival Harry Dean Stanton in the opening sequence, Oates renews ties with an old lover (Patricia Pearcy) who has kept herself removed from the sport, then begins to rebuild his cockfighting career. The plot never thickens much beyond that, but it never needs to. Oates' portrayal of a backwater existential hero slowly reveals a state of mind in which money, houses, and (most) women are valuable only as stakes in his game. Beautifully shot by Néstor Almendros and unmistakably filmed on location using real participants in the cockfighting underground, Hellman's not-always-simulated fight scenes will make the film rough going for anyone who likes animals, but it's tough to deny Cockfighter's effectiveness. What it lacks in Blacktop's dreamlike atmosphere, it matches in grit and a similarly resigned tone. One of the great character actors, Oates wrings more from his silent performance than many actors could manage from a sheaf of Shaw and Wilde, and in addition to Hellman's insightful commentary, the DVD pays tribute with the revealing, if clip-intensive, documentary Warren Oates: Across The Border. Producer Roger Corman chose to bring pulp master Charles Willeford's novel Cockfighter to the screen because it exploited a sport whose worldwide popularity nearly matched its notoriety. What he got instead (as happened remarkably often with directors used to working the margins) was an off-kilter, unforgettable art film created from equal parts celluloid, philosophy, and blood. --AV Club

*Be warned, this movie (regrettably) contains tons of unsimulated cruelty to animals.