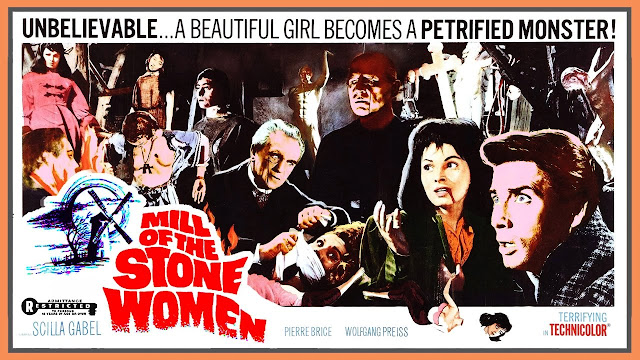 Following the release of Riccardo Freda's I Vampiri in 1956, the Golden Age of Italian horror cinema exploded onto the international scene. Over the course of the next twelve years, several films, which are now considered classics, were released within the genre. From monochrome masterpieces such as Black Sunday, Castle of Blood, and Nightmare Castle to kaleidoscopes of stunning color like The Whip and the Body and The Horrible Dr. Hichcock, the stream of creativity seemed endless. With the wealth of quality features that hit the screens during this time, some exceptional films are bound to be somewhat overlooked by fans of this glorious era. One such film is Giorgio Ferroni's Mill of the Stone Women. This neglected gem is a masterwork of gothic terror that deserves to be ranked among the highlights of a decade filled with macabre Italian delights.

The story takes place in the Netherlands where a young researcher by the name of Hans Von Arnim (Pierre Brice) travels to the village of Veeze in order to collect information for an article based around a local tourist attraction known as the Carousel of Stone Women. After first meeting the attraction's eccentric owner, Professor Gregorius Wahl (Herbert Bohme), Hans soon happens upon the professor's beautiful daughter Elfie (Scilla Gabel). He learns Elfie is under the care of the mysterious Dr. Bohlem (Wolfgang Preiss) for a dire medical condition. Unable to resist Elfie's seductive charms, Hans is soon led down a dark path filled with horrifying secrets and nightmarish visions.

During the opening title sequence, the film is said to be based on a short story taken from Pieter Van Weigen's Flemish Tales. However, in the production notes, provided by Pete Tombs of Mondo Macabro on the company's superlative DVD release, this was in all probability an attempt by the films promotions department to tie Mill of the Stone Women to a classic (albeit fictional) literary figure since this had become quite the rage at the time. In actuality, the story that was filmed was a joint effort by Ferroni, Remigio Del Grosso, Ugo Liberatore, and Giorgio Stegani.
Professor Wahl (Herbert Boehme) and his creations in Mill of the Stone Women

Two major influences help form the backbone of the tale conceived by this collaborative approach. First, the film imitates Freda's I Vampiri through the use of its restoration of life and beauty plot line. In Freda's film the Duchess Du Grand retains her youth and beauty by being administered a potion made from the blood of young girls which is supplied by a mad doctor who harbors a deep affection for her. The writers behind Mill of the Stone Women make only one alteration to this by switching the potion for a blood transfer. Every other detail of this plot strand is identical. The second influence is that of Andre De Toth's House of Wax.1 In De Toth's classic, Professor Henry Jarrod (Vincent Price) encases the bodies of those he has killed in wax, and then puts them on display in his exhibit which features murderers and martyrs from throughout history. Once again, this idea remains intact in Ferroni's feature.

Although these two plot points make up a bulk of the film's narrative, the writers do an excellent job of introducing secondary plots into the story which help provide a certain degree of originality. One of these sub-plots concerns Elfie's obsessive relationship with Hans, and is laced with a deep sense of tragic romanticism that helps differentiate the film from its inspirations. *Those who have yet to see Mill Of The Stone Women should be warned that the following synopsis contains spoilers* Having been locked away in her father's mill for countless years, Elfie longs to share her love with another. Her desperation for this feeling is evident as she falls for Hans the instant that they meet. After seducing him and promising that their affair will be for only one night, she discovers that Hans is in love with another woman. Jealousy soon takes over, and Elfie begins to exhibit the irrational traits of a spurned lover. This situation is compounded for Hans as Professor Wahl informs him that, due to Elfie's affliction, any sign of emotional duress could kill her. As Elfie's obsession grows out of control Hans confronts her and explains that they can never be together again. Outraged, she suffers an attack and dies. Death however holds no reprieve for Elfie as Dr. Bohlem reanimates her as he has done after every failed romance throughout her life. She is forever cursed to live life in an undead state, harboring a passionate desire for a love that she can never obtain.

The film's complexities are not limited to its screenplay alone as the story's tone and mood are set through the use of striking visuals. The exteriors, which were shot in Belgium2, provide cinematographer Pier Ludivico Pavoni's lens with beautiful canals, and tranquil village scenery which matches the time frame of the film's narrative to perfection. However, it is within the confines of the studio that Pavoni's talent shines the most. The sets drip with a dark, ominous atmosphere, which he accentuates with vibrant off-setting colors. For example there is simple scene in which the mysterious Elfie emerges from the darkness to descend a stairwell that's bathed in the films dominant color scheme of blues, grays, and browns. She is wearing a yellow dress, and holding two red roses which creates an arresting image for the viewer that stands in stark contrast to the character's surroundings. This evocative use of color is consistent throughout Mill of the Stone Women and provides the feature with a deep, rich, visual aesthetic.

Set design is key to creating the film's unsettling atmosphere. The interior of the titular mill features an overwhelming, expressionistic feel that relies on odd structural designs and slants. Stairways stand at crooked angles, and doors hang off center creating a nightmarish landscape. In the middle of this gloom-filled structure sits the carousel, a motorized diorama which depicts the fates of women accused as criminals in gory detail. This sophisticated piece of machinery operates through the use of a series of gears which cause its morbid wax caricatures to be propelled forward in a terrifying series of lurching motions. It's a ghastly set piece that will be remembered by the viewer long after the film's finale. 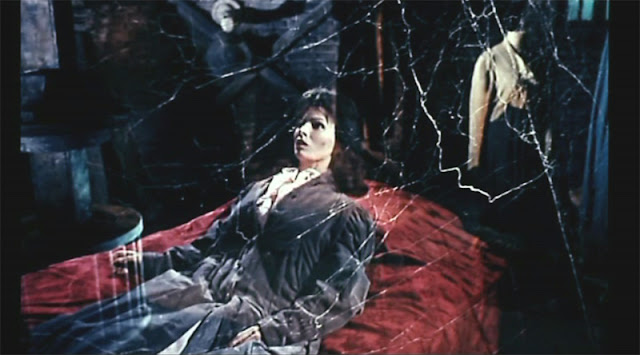 Juxtaposing the film's distinct, eerie visuals is the work of composer Carlo Innocenzi. Although he is best known for his work on Italian peplum's and action movies, Innocenzi offers up something different here with a dark, sinister score that blends to perfection with the haunted environment created by Pavoni. His piano driven arrangements enhance the films sequences of terror by piling on layers of percussion, and strings as the scene intensifies turning such moments into tension filled climaxes. It's a shame Innocenzi didn't contribute more to the horror genre, because as the score here attests, he displays a natural talent for the required dynamics.

These aforementioned artistic elements work in layers to create the films overall sense of mood with Hans's hallucination sequence being a primary example. After receiving a sedative from Dr. Bohlem, Hans begins to stumble from one room to the next, putting the mill's bizarre architecture on full display. Pavoni, in turn, fills these rooms with shadows and occasional flashes of red or blue light which adds to the chilling atmosphere. Underlying this is Innocenzi's score which uses its central motif to build tension, and piercing high pitched arrangements to punctuate terror, as Hans begins to unravel the mystery of the Mill through a series of spectral visions. In these scenes, like many others throughout the film, the combination of visuals and sound allow the film to take on a dreamlike quality that is both ominous as well as frightening.

Fans of 1960s Euro-horror will find a lot to like in director Giorgio Ferroni's Mill of the Stone Women. All of the decade's brilliance, beauty, and sense of the fantastique are prevalent within this underrated chiller which deserves to be seen by a much wider audience as it epitomizes everything you hope to find in a forgotten classic. --Classic Horror