Seven Days in May (John Frankenheimer, 1964)

What if the Joint Chiefs of Staff decided to overthrow the president of the United States in a military coup that would have dire consequences for American democracy? That's the intriguing premise behind Seven Days in May (1964), another political conspiracy thriller from the director that gave us The Manchurian Candidate (1962) - John Frankenheimer. Based on the popular novel by Fletcher Knebel and Charles W. Bailey II, the film pits President Jordan Lyman (Fredric March) against General James M. Scott (Burt Lancaster), a right-wing extremist consumed with patriotic zeal who considers the president's recent disarmament treaty with the Soviet Union an act of treason. Scott's attempts to overthrow the president through the help of other Pentagon officials and his own forces at a secret Air Force base in Texas provides a chilling scenario of the dangers of misplaced power in the military-industrial complex. It was certainly a relevant theme in the early sixties when relations between the U.S. and Russia were tense at best, and it remains a hot topic today.

The Knebel-Bailey novel was purchased for the screen through the joint efforts of Frankenheimer and Kirk Douglas, who agreed to produce and star in the film. However, the director almost backed out of the project when he learned that Douglas was intent on casting Burt Lancaster in the film. Frankenheimer had previously worked with Lancaster on Birdman of Alcatraz (1962) and found it to be a frustrating, demoralizing experience. During one heated argument over camera placement, the actor had picked Frankenheimer up off the ground, carried him across the room, and plunked him down, stating emphatically, "That's where the camera goes." Yet, despite major reservations about working with Lancaster again, Frankenheimer was assured by Douglas that there would be no problems on the set; Douglas even agreed to offer Lancaster his choice of roles, a generous gesture he would later regret.

Seven Days in May was shot on location in California, Arizona and selected areas in and around the District of Columbia. President Kennedy was particularly interested in seeing a movie version of the book and, thanks to his support, Frankenheimer was able to secure permission to film a riot sequence in front of the White House. But the filmmakers knew it was futile to ask any Pentagon officials if they could shoot any sequences at their headquarters; they returned to Paramount Studios to film those, except for one scene which was filmed without the Pentagon's knowledge. In Gerald Pratley's book, The Cinema of John Frankenheimer, the director said, "We had the camera in the back of a station wagon with a black cloth over it. Kirk...changed into his Marine Colonel's outfit. He...drove up and parked his car, got out and walked into the Pentagon. Three men saluted him. Three other officers saluted him. They really thought he was a colonel. He walked into the Pentagon. We had two cameras, each with a different lens. He turned right around, walked out, and got back into his car and drove off. This gave us entrance and exit shots. We were gone in about five minutes." 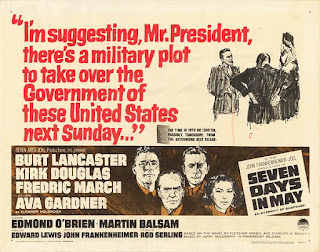 As Douglas had promised, Lancaster didn't create any problems for Frankenheimer during production on Seven Days in May. However, Ava Gardner was another story; she would call the director into her dressing room daily after several drinks to complain about the production, her part, or his favoritism toward other cast members. (She even accused the director of having a homosexual relationship with Kirk Douglas due to their numerous private meetings!) At the same time, some of the actors found Frankenheimer's directing style a little odd. Martin Balsam, in particular, was annoyed at Frankenheimer's habit of firing pistol shots close behind him during critical moments.

In John Frankenheimer: A Conversation with Charles Champlin, the director recalled his experience on Seven Days in May: "We rehearsed for two weeks and shot it in fifty days. The only big problem was that, just as I'd warned him, Douglas realized more and more that the colonel was a lousy part, much inferior to Burt's. One day in his dressing room in his undershorts he launched a tirade at me, including the fact that I did not seem to know a major star when I saw one....On the other hand, Lancaster and I became close friends during the making of Seven Days in May....I think one of the best scenes I ever directed was between Burt and Fredric March in the president's Oval Office, when Lancaster is telling him he has to resign, and March won't....I don't think I ever directed anyone who had the same kind of presence on the screen - and off the screen - as Burt."

As for Kirk Douglas, he certainly had a few things to say about Frankenheimer in his own autobiography, The Ragman's Son: "It's ironic. I arrange this rapprochement between Frankenheimer and Burt, and then the two of them go off, great buddies. In interviews later, Frankenheimer played the role of the great auteur - and I was just some actor working under his tutelage, grateful for his guidance. He twisted the whole thing around."

In his autobiography, Douglas also provided a little-known detail about Seven Days in May. "We also shot an ending that I liked very much, but which we didn't use. General Scott, the treacherous Burt Lancaster character, goes off in his sports car, and dies in a wreck. Was it an accident or suicide? Coming up out of the wreckage over the car radio is President Lyman Jordan's speech about the sanctity of the Constitution. Instead, the last time we see Burt is in his confrontation with me. He regards me as a traitor to him; I know he has been a traitor to the country. He says to me, "Do you know who Judas was?" I answer, "Yes. He's a man I used to work for and respect, until he disgraced the three stars on his uniform."

When Seven Days in May opened theatrically, it fared well with critics and audiences alike. The New York Times reported that it was "taut and exciting melodrama, as loaded as a Hitchcock mystery" and the film also picked up two Academy Award nominations; one for Best Supporting Actor (Edmond O'Brien's colorful turn as a southern senator fond of booze) and one for Best Art and Set Decoration.
--TCM