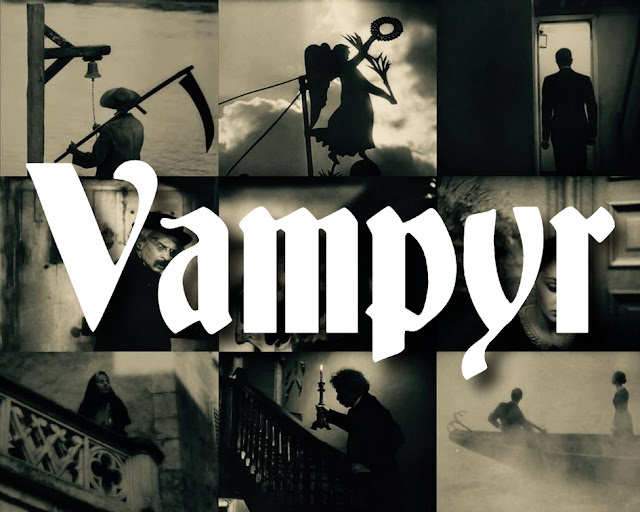 Best known for his 1928 silent film masterpiece, La Passion de Jeanne d’Arc, Danish director Carl Dreyer followed it with the 1932 release of Vampyr, a relatively early entry in the vampire film genre. Loosely based on the quasi-erotic short story thriller “Carmilla”, taken from J. Sheridan Le Fanu’s popular 1872 collection In a Glass Darkly, Vampyr is more than a mere horror film or genre film; it is a remarkable cinematic achievement that transcends such banal classifications and, in recent decades, has been widely recognised for its originality and depth. An ambiguous, cryptic, and at times mind-boggling hybrid of German Expressionist motifs and early horror film conventions, this eccentric film offers an original, and many would say unique cinematic perspective on the psychology of terror and the elusiveness of clarity, both existential and empirical.

Vampyr’s plot provides necessary scaffolding for the film’s rather free flowing, yet oddly consistent, surrealist imagery. The character Allan Gray (called “David Gray” in the English-language release) arrives at the remote and sparsely populated French village of Courtempierre. Smartly dressed in suit and tie and impeccably groomed, this obvious outsider stays at the nearby inn, where an intruder enters his room and cryptically utters, “she must not die”, before handing Gray a parcel with a note instructing that it not be opened until after the elder gentleman’s death. Shortly thereafter, he happens upon the castle-like chateau of the gentleman while literally chasing shadows (of those whose shadows have form and mobility independent of their corporeal sources, in one of the film’s most striking scenes), and discovers that the man’s teenage daughter is mysteriously ill. But any chance of conversation is cut short when a sniper’s bullet enters through the window and finds its target. Gray begins reading the book contained in the parcel, a history of vampire lore, and recognises the parallels between the book’s details and the strange behavior exhibited around him, including the girl’s mysterious illness. His suspicions are shortly confirmed when he and the girl’s older sister come upon the girl outdoors, splayed over a large rock as an androgynous crone bends over her upper torso and face; they watch in stunned horror as the crone raises her head from the ghastly task she has just completed, then disappears.

The subsequent dream-like sequence is considered by many viewers to be the film’s high-point. In a weakened state after contributing blood for the girl’s transfusion, Gray finds that his dream imagery, like the shadows earlier, has become manifest in the material world, or so it seems – the sequence of disorienting, disturbing images is ambiguously attributable to an imagined dream or a vivified psyche. Gray leaves himself sitting on a cemetery bench (convincingly rendered by way of double-exposure) and, entering a small workshop, discovers himself lying inside a coffin, eyes wide open and mouth agape. He watches from inside the coffin as the lid is sealed and it is transported to the cemetery, the upper stories of buildings and the tops of trees seen through the small window installed in the coffin lid. But upon arrival at the cemetery, he is found sitting on the bench where he had fallen asleep, and the two Grays are again fused. The plot wraps up straightforwardly at this point, as Gray and the gentleman’s household manager discover the evil crone lying undead in a nearby crypt; Gray then stakes her through the heart with a large and unmistakably phallic iron spike, and they watch as her body shrivels to mere skeleton. In a highly memorable and unusual scene of evil vanquished, the vampire crone’s assistant, a nefarious and devious village physician, attempts to escape the manager’s pursuit by running into a nearby mill, where he is improbably suffocated by several tons of milled flour suddenly released. Meanwhile, Gray and the attractive older sister head off together, holding hands as they enter a tree-lined, sunshine-filled meadow. But a brief shot of the mill’s huge gears, turning more slowly now that their job is done, is the film’s final image.

Vampyr was shot silent, with its rather awkward soundtrack added during post-production at the Klangfilm studio in Berlin. During location filming in France, Dreyer shot alternate takes of key scenes, in which actors spoke each of three separate languages – French, German and English – and using the German version as his base, he replaced the German with the English and French scenes and then overdubbed what remained. The sound does not match the actors’ lip movements at times in the French and English versions, owing to the fact that numerous scenes were shot in German only, though this effect is minimised by the film’s conspicuous dearth of audible speech, perhaps forty lines of discernible dialogue across the entire 65 or 75 minutes of narrative (available prints vary in length). The occasionally jarring and amateurish effects of the dubbed soundtrack – the assassin’s banjo playing and the dogs’ barking, for instance – are effectively offset by Wolfgang Zeller’s conventionally unifying music score, a separate track used in conjunction with all three versions. Despite the added sound, however, Vampyr has very much retained the look and feel of a silent film.

Cinematographers Rudolf Maté and Louis Née created a mood and tone that suits the film’s narrative, an unnerving and disorienting world where light and dark seem to operate outside of natural phenomena and where the characters’ interior thoughts and feelings are given external expression in the visuals that surround them. Eerie visuals, in black-and-white, are created through camera angles that convey a claustrophobic feeling, with low ceilings, narrow hallways, rooms of uneven yet universally crowded dimensions complemented by harsh lighting, shadows and darkness. It is not unlike the overall effect of Robert Wiene’s Das Kabinett des Dr. Caligari (1919), which unnerves the viewer even as the film’s internal characters seem oblivious to the oddness of their surroundings. One can see antecedents of Vampyr’s imagery and lighting in German Expressionism (especially Caligari) and early surrealism (e.g., Luis Buñuel and Salvador Dali’s Un Chien Andalou [1929]), as well as its influence upon later experimental narrative filmmakers such as David Lynch (Eraserhead, 1978). But Vampyr’s look, as well as its effects, are impressively and uniquely its own.

Despite the popularity of other early horror films such as F.W. Murnau’s Nosferatu (1922) and Tod Browning’s Dracula (1931), Dreyer’s film was not well received at the time of its initial release in May 1932. The nearly universal condemnation of his efforts, both popular and critical, apparently drove Dreyer into a self-imposed exile from the film industry for over a decade (others argue that Dreyer’s reputation for being difficult turned off potential backers until he proved himself with a public-service short in 1942 called Good Mothers). He returned to commercial film with Day of Wrath in 1943, a harrowing tale of 17th century Danish witchcraft trials likewise greeted by an indifferent public and unimpressed critics when first released. Despite the critical drubbing that Vampyr received upon its initial release, the film is recognised today for its high level of artistic achievement and its original and provocative treatment of psychological themes, rendered by way of memorable, disturbing images and a masterful handling of narrative form. --Senses of Cinema