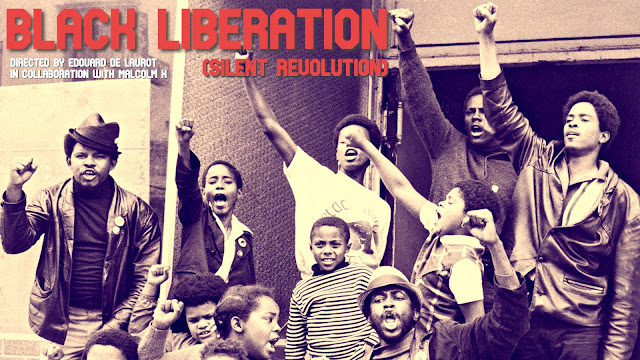 Unique in African-American History, Black Liberation is not just a "movie on Malcolm X." It incarnates his authentic spirit and will, The leader was actively involved behind the camera, as an essential creative and political force. Malcolm X did not want an idolatrous movie, replete with lengthy footage of himself at a microphone. Instead, he was determined to make an uncompromising film that was truly of, by, and for the African-American people. A politically serious European director shared that vision. He freely offered formidable cinematic experience, as well as his own film equipment and production facilities. Both men knew that the project would retain its integrity only if its makers owned the means of film production. Armed with minimal, yet strictly independent resources, they drew their filmmaking collective directly from the African-American community.

Black Liberation stars — the African-American People. Therein lies the power of the leader's filmic testament. African-American faces and voices speak for themselves. The men, women and children of this film — and their children — possess an extraordinary heritage. Black Liberation touched thousands of lives, and served to organize and politically educate the communities where the shooting took place.

Ossie Davis participates in the narration of Black Liberation, as a gesture of political solidarity. You will also hear the voices of Malcolm X, of other leaders, and of the many men and women unknown, who speak their minds, their hearts, their souls. The voices and music of the African-American People complement the explosively metaphoric documentary and docu-dramatic imagery.

The film moves at a speed consistent with the editing style of our present day. Twenty years before MTV, Black Liberation mastered the contemporary language of quick, synthetic imagery. The African drums of Black Liberation propel a rush of visual metaphor. On second and third viewing, the images reveal further layers of meaning, hitherto unseen. The style is straight out and near-subliminal at once. Black Liberation grabs you bodily, and takes you to the limit.

Judged incendiary in its own time, this film was never openly distributed in the country of its origin. Prints have been circulated within the African-American community, but were never plentiful or accessible enough to meet the demand. In the Third World and Europe, Black Liberation won respect both as "The First Truly Underground Film Coming From the USA," and as an exceptionally fine example of the cinematic art. The list of international awards would be impressive for any film, but it is stunning for a feature made primarily as an uncompromising expression of political rage and hope. Black Liberation is a prime example of how form and content can truly be worthy of one another. An explicitly political film can be a fine work of art.
--Zoelund