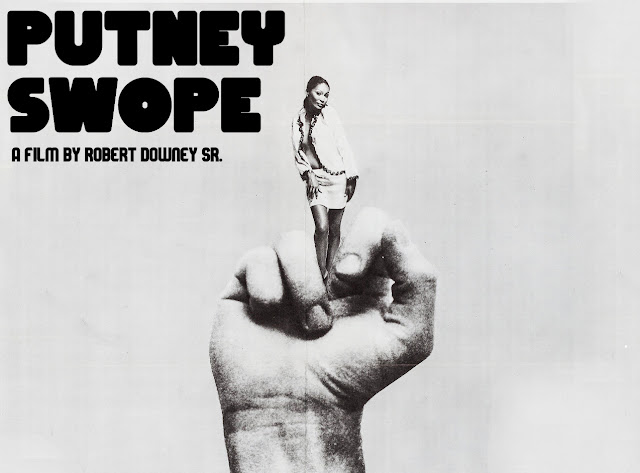 Its fans include Paul Thomas Anderson and the Coen brothers, Eddie Murphy, Chris Rock and Dave Chapelle. Its director is the not-so-famous father of an extremely famous - and, on occasion, extremely infamous - contemporary actor. It was nudged towards hip-hit status when Jane Fonda, appearing on Johnny Carson's Tonight show in 1969, proclaimed it a masterpiece. Its stars include an electrifying Antonio Fargas, six years before Car Wash and seven years before Huggy Bear; the ex-husband of suicidal freak-and-dwarf photographer Diane Arbus; two midgets, playing the US president and his fun-size first lady, whose only other credit is Werner Herzog's Even Dwarves Started Small. It climaxes with Fargas, dressed as an Arab potentate, setting fire to millions of dollars with a Molotov cocktail, and - oh yeah - it's the first movie in history to deploy that notoriously potent revolutionary code-word "jism".

Robert Downey's Putney Swope, a scathing, hugely energetic and scattershot satire about the black takeover of a lilywhite Madison Avenue ad agency, made a lot of Top 10 Lists back at the end of the 1960s and then disappeared, seemingly for good. Now it's back, on DVD in the USA and at a screening in London. The chance to reassess it shouldn't be missed by anyone who cherishes the lost movies of a tumultuous era in American history and American cinema. I first saw it two decades ago and it has lost precious little of its pitch-black satirical zing in the years since. Indeed, like a number of movies from that period, it seems not less but more relevant now than then. It dated badly for a while, then came full-circle back into renewed potency.

So it's disconcerting to catch up with Downey and hear his first words: "I don't love it very much. It's an old movie and, in its own moment, it got very lucky to get distributed at all." The distributor, Don Rugoff of Cinema Five, was almost turned away from the screening by Downey himself. "And then at the end of the screening he came up and said, 'I don't understand this movie, but I like it. Come see me.' And he opened it about a month later on 3rd Avenue and the poster for the movie was so strong" - it's a fist giving the finger, with a sexy model instead of the digit in question, reminiscent of the logo for M*A*S*H, and the tagline "Up Madison Avenue" - "that when he showed it to me I said, 'it's better than the movie!' And it found an audience, which was very unusual for my stuff." (This hitherto had mainly consisted of short absurdist movies with tasty titles like Balls Bluff, Chafed Elbows and Sweet Smell of Sex).

Downey is pushing 70 now, has a fine full head of white hair, and sounds like your Jewish uncle who just drove 16 hours to the family reunion and now wants an iced tea, a knish and a comfy place on the couch. Push him a little, though, and he regales you with a few anecdotes about what a crazy old dog he was back in the day.

"I was making movies that were getting a nice response in New York and playing in one theatre in Greenwich Village for a few months. And I was also working at an outfit that was experimenting with films on the side. One day a black guy who was working with me came up and said, 'Hey we do the same job but you get paid more than me.' I said, let's go see the boss, who was a great guy, and he said, and this is in the movie, 'See, if I give him a raise, I gotta give you a raise, too, and then we're right back where we started.' And that stayed in my brain forever. And working around people who made commercials gave me a lot of insight. I had a brother-in-law who worked at an ad agency who put me into a meeting and said I was from South America and couldn't speak English, so I could just sit there and pick up all this real stuff. So that's how it happened."

The movie's impact may have had to do with its long and splendidly demented opening sequence, in which a hairy, biker-looking feller descends on Manhattan from on high in a helicopter (the back of his Hell Angels-like colours-jacket reads "Mensa: Chapter X"), strides into the ad agency's boardroom and, having been introduced as an high-calibre expert in market research, announces that beer is a bullshit product that appeals most strongly to men with a deep-seated sense of their own sexual inadequacy. "In short, gentlemen, beer is peepee-dicky" - whatever that means - and then he walks out, leaving us trapped in the room with a rogues' gallery of corporate grotesques, nodding-donkey yes-men, rich white stereotypes and barely sentient boardroom idiots. 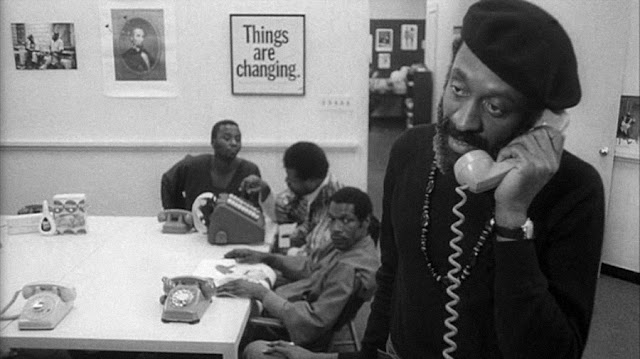 Moments later, Mario, the founder of the firm, enters grandly and dies pretty much immediately, falling face-down on the boardroom table. A senile old place-filler (Joe Engler) - weirdly reminiscent of quaking little Jimmy Conklin from Preston Sturges's movies - keeps asking, "How many syllables, Mario?" over and over again, even as the sharky board members conduct a vote that, by dint of corporate racism and internecine paranoia, installs the token black member among them, musical director Putney Swope (Arnold Johnson), as the company's new chairman and CEO.

After fending off jealous co-boardmembers who offer him various satanic quid-pro-quos ("If you give me the job, Putney, I'll get you into the Knights of Columbus!") Swope spends the remainder of the film ousting Big Whitey, installing a staff of no less venal, corrupt and money-hungry black hucksters and hustlers, and remaking the world of advertising by demanding millions from his gullible white-bread clients and making ads that underscore the crudity and dishonesty of the very concept of marketing itself.

Interspersed with the film's beautiful high-contrast black-and-white cinematography is a series of sort-focus Technicolor faux-commercials for products of quite stupefying crassness. After one toy manufacturer demands an ad for his latest kids' item, "a Junior-Miss flame-thrower that works on regular lighter-fuel", it's a short hike to commercials for "Ethereal Cereal" - the tagline is "No Sheee-it?" - or an explosion-prone neo-Nazi-backed car called "the Bormann Six".

Like I say: scattershot. Putney Swope is what happened when a New York Jewish absurdist comic sensibility like Downey's, far harsher and more cynical than the cuddly version being purveyed by at the time by mainstream contemporaries like Woody Allen and Mel Brooks (who in fact has a nanosecond-long cameo in Putney Swope), collides with a revolutionary African-American worldview.

The success of the movie is underlined by its appeal to the fans mentioned earlier: white boy Anderson, the Jewish Coens, and, far less predictably, three of the great black hopes of African-American standup comedy of the last two decades. I ask him if there were any Afro-Jewish tensions on the set. No, he says, not at all. But interestingly, elements of the backstabbing atmosphere in the script turned up on the set itself, particularly because of Johnson's inability to remember his lines. Downey has sometimes been accused, quite wrongly, of racism for replacing Johnson's voice with his own, but insists that it was a desperate measure forced upon him by a shortage of funds and the impossibility of recasting - something he was loath to do anyway because Johnson was a fine actor and perfect for the role. "Anyhow, I dubbed Arnold's lines later - that's my voice. So the other guys in the cast suddenly began to come up and say, "Get rid of him. I'll play the part,' and I began to see this dynamic taking place on the set that was in the movie, in a way."

Along with Jane Fonda, perhaps the movie's biggest help came from Vincent Canby of the New York Times, but more importantly from a reviewer at the New York Daily News, whose anti-encomium now adorns the US DVD reissue. She hated it. "Vicious and vile. The most offensive picture I've ever seen." "Yeah, that put it on the map in an even bigger way!" chuckles the director.

And the movie's effect on advertising in general? Zilch. "There was a guy at a college where I took the movie to show to students, and at the end he came up to me. He had on a bow-tie and he said, 'MISTER Downey,' both of which had me frightened already, and he said, 'I want to thank you for getting me into advertising!' And that's when I knew I knew absolutely nothing." --The Guardian