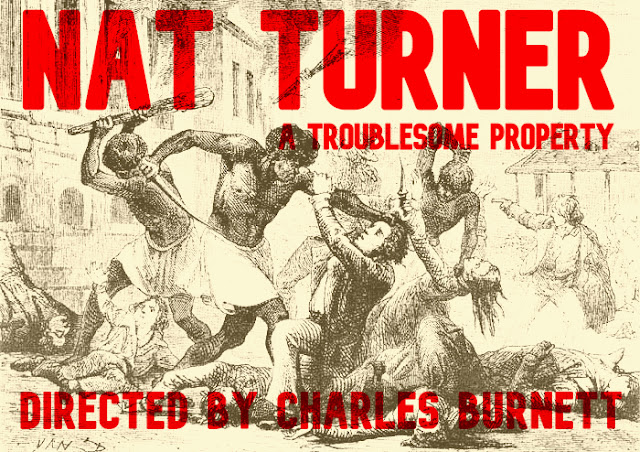 "In the days before his execution, Nat Turner will agree to tell his story. But after his death, his words will become the property of others, as his body was during his life."

Someone please explain how Charles Burnett keeps making these thought-provoking, emotionally powerful masterpieces in such bizarre formats. A Disney TV film, a 12-minute short film, a neorealist 80-minute feature where nothing happens, and now this 60-minute PBS/History Channel documentary on the Nat Turner rebellion.

Burnett looks at how the task of telling the story of Nat Turner is a treacherous, slippery, and morally complex one. Because Turner's "confessions" of 1831 were channeled through a white lawyer named Thomas Gray, we can never know for certain who the "real" Nat Turner was. All historians can hope for is the nuggets in the Confessions which can sound like Nat (nuggets which are few and far between). This gives artists a plethora of material to work with: to reshape, reclaim, and refashion Nat Turner to serve their own desires. But this also means that we can never understand Nat Turner from a truly historiographical point-of-view. Thus, Nat Turner: A Troublesome Property becomes a brilliant investigation on the shortcomings of historical interpretation, of artistic license (best seen through its extended treatment of William Styron's controversial fictional novel The Confessions of Nat Turner), and of the blur between reality and fiction in representation. From major players--from Styron himself and slavery scholars Kenneth Greenberg and Eugene Genovese--to border players who have lots of stakes in the issues--Ossie Davis, black and white Afro-American-studies professors--Burnett interviews a slew of fascinating folks who give their insights into how they interpret Nat Turner. All have equally legitimate claims. All have points where they easily contradict one another. All have moments where we disagree with them based on what someone after them says. No one is ever "more" right", and Burnett keeps the proceedings electrically objective and still Wiseman-ly subjective. The most fascinating, telling, damning, interesting quote comes from an old white woman who is a Southampton County museum curator, the location of the Nat Turner Rebellion: "All I'll say is this. Slavery....was so wrong. But murder....is wrong, too."

When a documentary-with-recreations such as this becomes as important a historiographical tool as the actual confessions of the slave himself, you know you're in deep over your head in knottedup matters that not even the Seasoned Historian can untangle. In its final ten minutes, Burnett (like Charles Willson Peale in his Artist in his Museum, or the titular Wizard in L. Frank Baum's tale) pulls back the curtain of his own fantasy, his own complex mixture of truth and fiction, and we're blown away when we see the Wizard at work making the story happen. This is necessary viewing for anyone who wants to know more about America's history of slavery (which I assume includes every thinking-living-breathing American).

I would also recommend watching this AND reading Kenneth Greenberg's excellently compiled The Confessions of Nat Turner and Other Documents before tackling the upcoming behemoth of 2016 independent cinema that is The Birth of a Nation. Burnett's documentary and Greenberg's anthology give us important insights and interpretive lenses on how to best approach the increasingly complex story of Nat Turner. Brace yourself. It's about to get even trickier. --Letterboxd

Note: The actual film ends at 56.13 in the video below, though the youtube video, which I assume someone ripped from their TV, continues past that point.