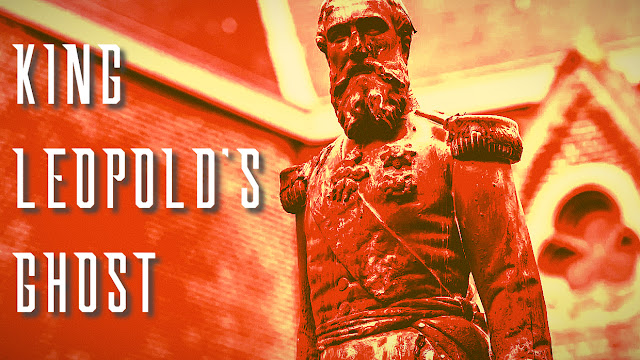 King Leopold’s Ghost is not a movie to be evaluated simply as a piece of cinema seeking to balance form and content. Of the form there is little to say, especially since the content is so overwhelmingly mesmerizing in its depiction of the depths to which some human beings will descend in the oppression, torture, mutilation and murder of others in the systematic pursuit of profits. Millions of people were murdered in Congo, and not because of some theocratic imperative, as in the mutual slaughter of Muslims and Hindus after India gained its independence from Britain. Nor was it simply another instance of European colonialism in Africa.

King Leopold II of Belgium (1835-1909) was in a class by himself as a colonial exploiter. He reigned as King of Belgium from 1865 to his death. He also reigned as King of the Congo Free State from 1876 to 1904, when he was forced to abdicate because the horrors of his supposedly “benevolent” rule could no longer be hidden or suppressed. But he didn’t abandon Congo empty-handed: He sold his holdings in the colony to the Belgium nation for what might be described as a princely sum, if not an outright swindle of the Belgian people. The monuments to Leopold’s greed can be seen today in many parts of Belgium and the French Riviera. Indeed, the thriving port city of Antwerp was built virtually on the backs of the wretched Congolese laborers engaged in the labor-intensive industries of mining, harvesting and hunting for gold, diamonds, rubber and ivory, among many other valuable commodities. In more recent times, Congo has become one of the chief sources of uranium for the world’s nuclear generators and arsenals. That is the ultimate horror of the film: that not much has changed since Leopold II began his artfully capitalist manipulations over a century ago. In the end, he is almost a comic figure in what has turned out to be an unending horror-movie nightmare of prodigious proportions.

Among the more fascinating footnotes to this saga of evildoing is the derogation, even destruction, of the legend of British journalist, explorer and self-glorifier Sir Henry Morton Stanley (1841-1904), best known in the popular mind for his expedition into Africa in search of David Livingstone, whom he greeted with the words “Doctor Livingstone, I presume?” in 1871. I still remember Henry King’s 1939 Stanley and Livingstone, in which Spencer Tracy as Stanley asks the famous question of Cedric Hardwicke. It turns out that Stanley had a more shameful mission in Africa, serving as Leopold’s advance bullyboy to intimidate the natives and hunt elephants for their valuable ivory. In essence, the time-honored Stanley was an imperial thug for Leopold II, and the Congolese people felt the lash of his whip, both real and metaphorical.

A more edifying footnote involves the immortal Polish-British novelist Joseph Conrad (1857-1924), whose experiences as a steamboat captain in Congo provided him with the background material for The Heart of Darkness (1899). When Marlow, the narrator of Conrad’s tale, journeys up the river in search of the madman Kurtz, he finds him hallucinating to the refrain of “the horror, the horror”—Conrad’s elegant summation of what he himself had found in Leopold’s tormented realm. Ironically, Leopold himself never set foot in Congo, though his massive footprints in the region are still visible today in the poverty and suffering of the Congolese people, who have never benefited from the exploitation of the region’s vast resources.

The U.S. government and many of the largest American corporations have collaborated with the Belgian colonialists and their own military and corporate sponsors to keep the people of the region from shaping their own destinies. During the period of the Cold War, President Eisenhower and the C.I.A. conspired with the Belgian military to have nationalist leader Patrice Lumumba arrested and murdered by a military thug named Mobuto Sese Seko, who continued the looting of Congo in the name of the anti-Communist crusade—an ideological dodge that Leopold himself would certainly have appreciated if only he’d been around to see it. King Leopold’s Ghost can be recommended as an economical education in one of the lesser-known atrocities of the capitalist system, as well as an eye-opening account of history’s most ruthless amasser of wealth. The people down at Wall Street should erect a statue to the larcenous Leopold: Why should Belgium and the French Riviera have all his monuments? --Andrew Sarris, The Observer